I must confess that I’ve been saving the best one of the three churches we saw for the last. I don’t know whether it because we were lightheaded from getting off a flight and heading directly to see the sights, or whether it was the novelty of being in a new city but it seemed to me that this little church threw open for us its heart and soul in a way that few places in the world have done before. We walked in and bought tickets, expecting a standard walk around the church, but what we got was an involved leisurely tour that allowed us to caress each piece of wood we fancied and linger at each pillar we liked.

It was here that we, once again, had the standard Ecuadorian conversation……

“De donde eres? Where are you from?”

….but with the extra warmth and pride that Cuencans seem to have.

In Todos Santos, the oldest church in the city, those words came from the lips of a nun of the Oblate Order, which was set up in the late 19th century here and have played a key role in adding to the church structure as well as setting up community infrastructure, chiefly a school in the premises that was the first to permit Indian women to attend (and is still in existence today). Many of the Oblate nuns lived under an oath of silence inside the convent here and continue to be highly regarded in Cuenca. With this conversation began the most detailed tour of a heritage site that I’ve ever had.

In the late 1530s when it was constructed, the Iglesias Todos Santos or the All Saints Church was instrumental in helping the Spanish conquistadors establish the Catholic faith in a terrain steeped in Inca practices intermingled with the pre-Inca Canari culture (many pre-spanish graves were found during restoration). In fact, it is rumored to have been built on a site called Ushno, which was sacred to indigenous people and used for religious rituals by them.Even after the Spanish established the city of Cuenca in 1557 and began to hold their religious services in El Sagrario (read here), Todos Santos continued to be the primary church for the ‘evangelising’ of native people.

Architecturally, like in other monuments we saw of the period, Todos Santos was a curious mix of native technology and art with Spanish aesthetic sensibilities. Originally, the church was built on wooden frames and filled with adobe walls, built with a special mud-brick called bahareque, which the Canaris made with a mix of sugarcane, straw and clay.

Phoenix-like, this beautiful building underwent significant restoration between 2010-12 after being nearly destroyed in two fires in 2005 and 2007. The restoration uncovered the exquisite murals that had been unfortunately painted over in 1960. What we saw, therefore, was a church proud of its second lease of life. Locally made terracotta tiles, the detailed paintings over the stucco walls, the use of bright colors like cobalt blue, gold, red and yellow, the bright blue and gold ceiling tiles all clearly spoke of the influence of local art on this church, perhaps inevitable in those early years. 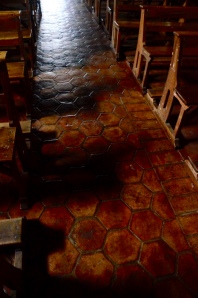 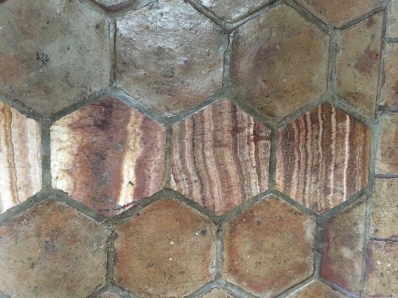 …with a row of inlaid marble tiles! 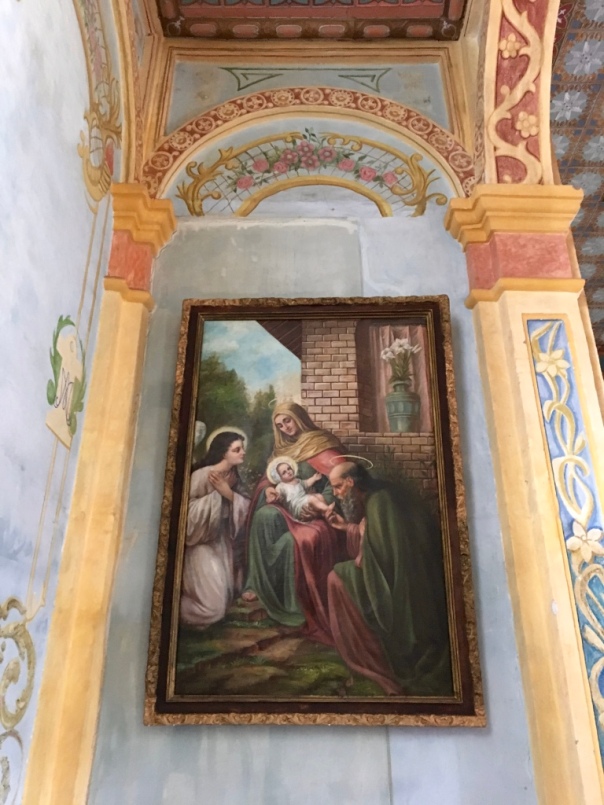 Restored church organ, still played in tune. We know because Kim pulled it out and played it!

As we climbed higher and higher into the bell tower and beyond, we could see the surviving original wooden beams replaced and reinforced by new ones labeled 2009 and 2010. Standing high above the terracotta roofs of the city, with stunning vistas all around us, it wasn’t hard to imagine the awe a religious structure as well-proportioned and intricately decorated as Todos Santos might have evoked in the Canari and Inca people back in the 16th century. After all, even we had our jaws dropping to the floor and our eyes agog!

On a lighter note, I discovered while scouring the Internet later that we weren’t the only ones who had got the full detailed tour of Todos Santos! Many others had given it rave reviews citing the care with which they had been shown around. Far from feeling bad about it, I’ve been feeling delighted that the little church is in such very dedicated hands! 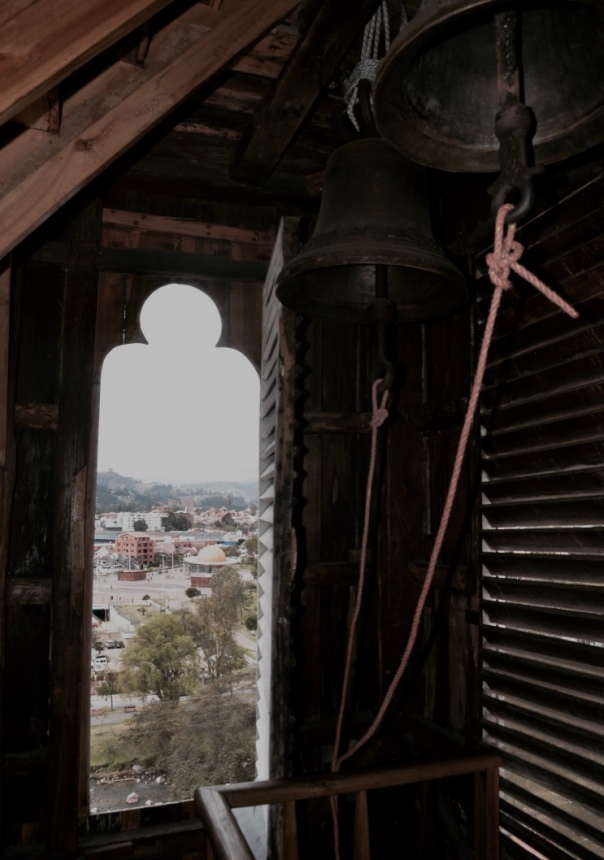