As I watched the superbly skilled Vidya Balan in ‘Kahaani’ tonight (film highly recommended), I could not stop admiring the way Sujoy Ghosh has romanced Kolkata in the film. Portrayed in a suitably old world tint, every frame captured the worst of Kolkata and converted it into an endearing visual. Poverty, entangled wires, hand riksha pullers, the jerky motion of the tram, the roadside tea stalls, the winding alleys, the decaying buildings, the traffic and ceaseless mass of humanity. Faces creased with worry, faces that smiled, faces that wore indescribably expressions. I wanted to go there immediately and lose myself in this great city, all by myself, with a sketchpad and camera. Kolkata has been hitting me for the past few months through books, articles and visits by friends and family; it’s beckoning for sure!

Mind still filled with images of lovely Kolkata, what a shock it was for us to step out of the exit into a stairwell that had a ceiling not even 6 feet high! As we walked down the exit stairs, we were met with the most extraordinary amount of filth and litter. One landing had rotting vegetables, presumably supplies that the banquet hall on that floor hadn’t consumed for the wedding dinner they were hosting. Another landing had piles of rubbish. Another had spit stains, yet another had used, discarded plates with wasted food spilling out, another had mattresses piled in it! The stairway was barely lit (anyone could have slipped and fallen), the exits back into the mall were locked, so no one could leave the smelly stairwell even if they wanted to.

Nearing the end of this horrendous journey, I started to take pictures; believe me, these tell only a small bit of the tale (i was unable to go against the flow of traffic to capture the real gems!). Perhaps the romantic street scenes of Kolkata, when met in the flesh, may not seem so beautiful, I realized, as I filled with rage at the irresponsibility of SRS Cinema and Omaxe (this was in the Omaxe Celebration Mall on Sohna Road, Gurgaon). How could they let an entire movie hall full of audiences, who paid hard earned money for tickets to be subjected to such a humiliating experience. The least I could do was document this and here are the pictures to tell the story. 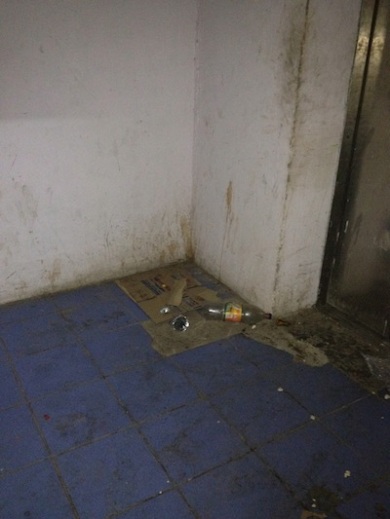 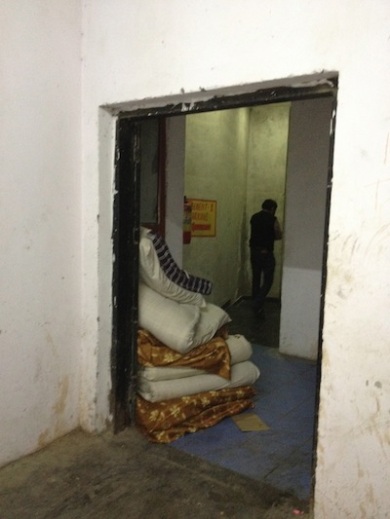