Do large-scale cultural events help neighborhoods? Reflections on the #UABB in Nantou, Shenzhen

We visited Nantou on the last leg of our 2016 week-long field trip to Shenzhen on a hot, humid day. In contrast to the pulsating lanes of Baishouzhou and its unapologetic messiness, where we had spent relatively more time, Nantou appeared quaint and well suited to touristic exploration.  After all, the settlement had once been a walled city of considerable political importance, and the remnants of that history were strewn across the village in the form of arched gateways, temples and sacred niches. My most vivid memory is that of an active main street full of the myriad tastes of China punctuated by a select number of restored (or being restored) buildings. This, in stark contrast to Hubei, a true blue urban village dating back to the 15th century that faces redevelopment.

This year, Nantou was the venue of the UABB, the bi-city biennale of Urbanism/Architecture that brings together artwork related to the urban experiences of Hong Kong and Shenzhen. Walking towards the South Gate of Nantou, we recognized familiar landmarks – the ancestor hall, the ornate gate itself, the garden and its sculptures. And further in, the smaller gate that enters the settlement itself. 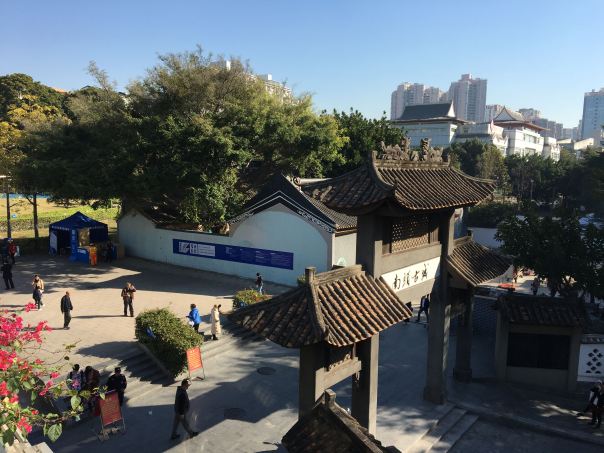 The impressive gate and ancestor hall in Nantou remains unchanged. The white blank wall with the UABB signage on it hides a politically contentious painting that caused a furor during the event’s opening. The controversy led to the review and censoring of many artworks, raising queries about the UABB as a space for dialogue, creativity and expression.

Once we stepped inside, we realized how transformed the space was from what it used to be. The street before us, full of vendors and teeming with life, was now a subdued cleaned-up version of itself. New open spaces had been carved out and designed with great taste, but ‘no climbing’, ‘no touching’ signs all over the street furniture in these made us wonder what the village residents were thinking about the redesign interventions. At the very least, these spaces were being used in many ways and by different kinds of people. Newspapers were being read here, mothers and children were catching the winter sun and old women were resting as well. Further in, we found another lovely large open space – a new basketball court, temporarily in disuse. Presumably it will be resurrected and used as it should once the UABB is over. 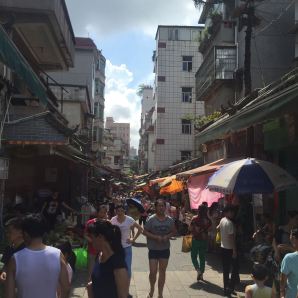 Shaun Teo, whose PhD research is looking at the UABB’s transformative impacts, pointed out many more interventions in a very interesting tour he conducted that afternoon. He showed us some of the redesigned shops in the village, which looked beautiful but to my eyes were a clear push towards gentrification. Shaun showed us two interventions that emerged from a competition: 1- An attempt at entrepreneurship by a migrant renter who was running a cafe at the UABB in partnership with one of the organizers, and 2- A young urban designer’s redesign of a ground floor shop into the Nantou Living Room, his living space that doubles up into a space for village residents to meet and interact. Already, fresh interventions are spinning off of these. The entrepreneur is gathering capital to set up shop on a more permanent basis and the urban designer is taking baby steps forward with the landscaping of a “secret garden” tucked away behind his alley.

What does an event like the UABB signify to the residents of a neighborhood like Nantou? It is obvious that many have been displaced to make the event possible. Vendors, for sure, have been asked to leave and even some factories in order to get clear floor space for the exhibition halls. Most likely, the UABB has sped up the process of gentrification and the pricing out of current renters, in a location where rents are already quite high. This might mean higher densities and I’m unsure how Shenzhen authorities will balance the heritage value of Nantou will the unfolding densification processes.

On the positive side, the redesigned public spaces and wall art have added value too. From what I heard, the design of the venue was not exactly a consultative process, nor have the venues of previous editions of the UABB retained their look and feel after the event. Perhaps Nantou will reclaim its spaces back and make of them what they want to. Given that Shenzhen is currently working on the redevelopment of urban villages, a gentrified Nantou with a smattering of resident-friendly spaces and interventions is perhaps a best case scenario!

Street vendors, or hawkers as we also call them, are such an integral part of our lives in Indian cities. I just finished reading a book by Musharraf Ali Farooqi, a delicious little novella named ‘Between Clay and Dust’. The story revolves around a pahalwan and a tawaif who share a beautiful platonic relationship that eventually surpasses all others in their lives, even blood ties. Set immediately post Partition, I found it fascinating that Gohar Jan’s source of news about the city was mostly through peddlars of wares and services like the bangle seller, the trinket lady, etc.

I remember the iconic Farooq Sheikh, Deepti Naval starrer ‘Chashme Baddoor’ from my childhood. Naval sold Chamko detergent powder door-to-door. I associated the film with a few visits to Delhi during my childhood when residential areas in South Delhi had a certain quiet buzz about them and vendors of many daily necessities, including fruits and vegetables, peddled their wares from door to door on a rudimentary wooden pushcart (redi). Coming from Mumbai, which had already become a big city where you went to the commodity and it rarely came to you, all this seemed fascinating.

From the two years I spent as an infant, I have very vague memories of the guys who walked through the streets with the bear (bhaloo) and the monkeys (madari with his bandars) to entertain us kids. We discussed this  at lunch on Sunday and between mum, Rahul and me, we added more variety to that list- the knife sharpening guy, the utensil repairing guy, in an earlier time there were people who would come and coat brass vessels with aluminum so they could be used for cooking purposes.

It pains me to see this breed disappear. Not just because they imbued a certain flavor to our cities, but because it signals the arrival of a use-and-throw culture in which we have no place for repair re-use. I feel this is criminal. While the world is waking up to the benefits if re-use, we Indians who had a natural talent for this are giving away the advantage by blindly adopting a consumerist culture that exhibits no conscience at all. Also, the trend signifies our paranoia of letting unknown persons enter our homes. With gated living becoming popular, the breed will disappear entirely.

And yet, street vendors continue to thrive in certain situations because of their flexibility in adapting to demand and the meager resources they need. And nowhere is this more evident than in the omnipresence of street food! What would our public places be without the bhuttawala (guy selling corn cobs roasted right in front of you on hot coals), the chaat wala, the aloo bonda wala, the lassi stalls, the chana kulcha and chowmein stalls, the burger wala, the momo-guy (a relatively new addition)..the list is endless! Outside the posh Galleria market in Gurgaon, where the well heeled shop and splurge, the anda bread guy does brisk business. Outside Gurgaon’s call centers, the paratha stalls mint money and provide excellent service even in the middle of the night, with piping hot tea or cold drinks, whichever you prefer! Outside every glass and steel office building, there are clusters of food vendors, selling hot and freshly cooked meals. This is the real India, never mind the people inside the glass boxes pecking on their grilled sandwiches and pasta, or alternatively gingerly opening a home cooked tiffin while yearning for takeaway Chinese!

It alarms me that municipalities like Delhi and Mumbai have taken a hostile stance towards street vendors. There are plenty of ways they can ensure hygiene without taking these people off the streets. A couple of evocative articles by Prof. Sharit Bhowmik from Tata Institute of Social Sciences in Mumbai,  tell a compelling tale of the relationship hawkers have to the city’s economy and make a case for nurturing street vending and providing it a conducive ecosystem.

Evictions and cleansing the streets reek of narrow-mindedness, complete apathy for the urban poor who make a living out of as well as subsist on buying from street vendors as well as a lack of sense of place, to which street vendors contribute in an immeasurable but significant manner. To me, it is critical that professionals and citizens alike talk about the kind of urbanism we aspire to. Without this sort of debate, we will continue to lose our identity to idiotic regulations, till we are left with a bland existence and even the memories of a fuller, finer life are erased.