Affordable housing is tricky the world over! Dark clouds and the silver lining- July 25, 2012

Affordable housing in clearly a tough nut to crack. Everywhere.

I was interested to read the following lines in The Global Urbanist’s feature titled ‘Is vertical living a solution for London’s strained housing stock?’, which discusses the possibility of densifying areas of London to cater to the growing demand for housing:

Underpinning the density debate is the politics of compromise. Dollar Bay in Canary Wharf, a 31-storey luxury tower providing 111 high specification apartments, was granted planning permission in part because it contributed 51% of the area of the scheme towards affordable housing. The reason it could achieve this, however, was because it was provided off-site, with the majority of its 59 affordable housing units approximately one mile away. Many schemes don’t even identify a site, simply providing funds towards a local authority’s affordable housing budget; King’s Reach Tower contributed approximately 22 million pounds, for example.

To me, working in the Indian context, this is both a hopeful and a hopeless statement. Hopeful because it offers solutions- asking developers of high-end high-rise housing to provide affordable housing stock or contribute to a fund for the same. Hopeless because it smacks of the same sort of social divide (note, the affordable stock is in another location) and ‘politics of compromise’ as here in India. Of course, the management and execution of a fund for affordable housing in India would in itself be a nightmare, with issues like weak will, corruption and scams being the fate of most well-intentioned public schemes. 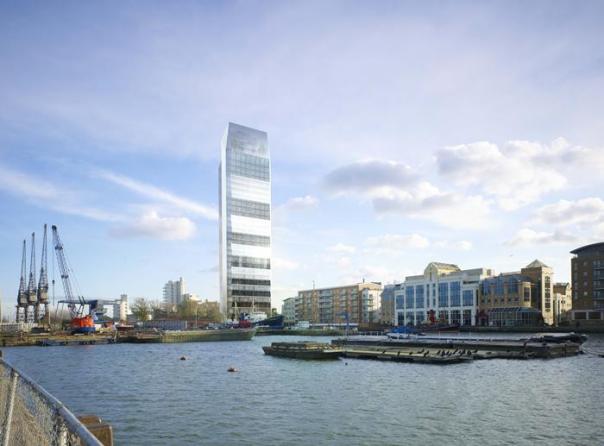 Dollar Bay, the 31-storey slim slim tower, is being advertised as a ‘new icon’ for Canary Wharf. It was given planning permission (partly) because it created affordable housing units a mile away.

The other article authored by Dr. Mathew Gebhardt of Portland State University that came to me today via realism.in (a great initiative, doing a super job of creating relevant information) discussed experiences in the United States with mixed financing for affordable housing projects. The piece simply blew my mind. It mirrored so closely what we are trying to do in India that I realized it was critical to study experiences elsewhere very very closely, not just experiences in other so-called developing nations like Brazil, Argentina and Thailand, but also in the developed world, where the struggle to create affordable housing has had a longer history.

The challenges are rarely where you expect them to be. The vast differences in the aspirations and needs of low-income families vi-a-viz middle-income families is true of the US as much as in India. Genhrat writes: There is a tension between the need to design market rate units with high end amenities to meet market demand and lender criteria and affordable units in the most cost effective manner to meet program requirements. As an example, en-suite bathrooms or air conditioning might make sense for market rate units but are unnecessary and unallowable additions for affordable units. We face the exact same type of issues while designing affordable homes here and community inputs are key.

However, even when you have developers who might be willing to come forth and enter this segment, they are challenged by a complex regulatory environment, the access to finance is complicated, incentives are often unavailable because of multiple schemes that rule each other out! We see this in India all the time. Gebhart details the same experiences in the US as well. Complicated programs that make accessing public funds confusing and difficult or mixed finance schemes that are equally or even more risky than competing projects are not likely to attract the number or diversity of developers or lenders that are necessary to address significant affordable housing shortfalls.

Sigh! This is a tough nut indeed… and it is clear we need a lot more experimentation and collaborative thinking. Plus, a comprehensive and intelligent documentation of what has happened and is happening to guide future work.