It’s World Toilet Day again. My twitter timeline is abuzz today with statistics, video links, article links, all painting a scary picture of how many people in the world live in conditions of poor sanitation, how much this costs us in economic terms, health terms, etc. (other hilarious tweets about people being conceived in and born in toilets, locked inside them, etc are also doing the rounds as is expected in the jamboree called twitter!)

I’ve seen plenty of toilets up close, recently in my fieldwork among migrant workers in Gurgaon’s urban villages and unauthorized colonies as well as over the last few years of working with micro Home Solutions in low-income areas across Delhi. Adequacy as well as maintenance of toilets is a huge issue in slums and other informal areas . Various experiences have shown that shared toilets are very hard to maintain (see post on the pathetic state of toilets in a Delhi slum); yet, it can be nearly impossible to retrofit communities to provide toilets for every household. One thing is clear though. Household toilets are the Number 1 aspiration for low-income families across India, whether urban or rural. Deeply connected with dignity and security, especially for women, and also now implying status, households seek to install toilets as soon as they have sewage connections and funding in place.

But what about those without any secure tenure? Renters, for instance. In Gurgaon, I find migrant workers living in semi-permanent shacks or relatively permanent tenements sharing a toilet between 10 or even upto 20 households! Toilets with broken doors, inadequate water supply and barely any maintenance are common in these jhuggis and tenements. However, contrary to the perception that it is single male migrants that live here and accord low priority to sanitation, I found at least half of these homes occupied by families, with women and children suffering acutely because of the poor sanitation facilities. Unfortunately, a relationship of deference and almost fear with the landlord coupled with the peculiar migrant mindset of transition combine to make demanding better toilets a difficult proposition. 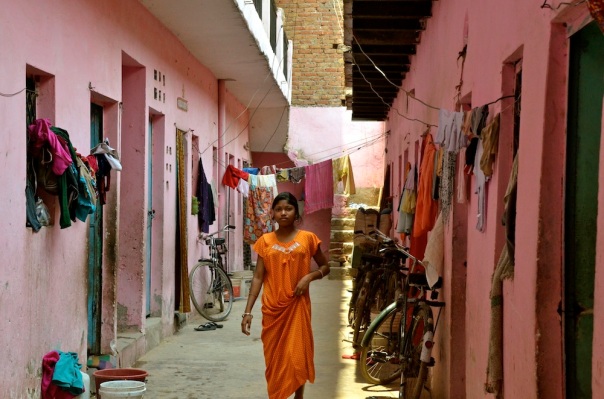 All of the families on this floor share 1 toilet! Men go first, then the schoolgoing kids, women wait their turn…

Migrant workers who live in more upgraded rooms that offer more privacy share their amenities among 8-10 families and are better able to negotiate better maintained toilets and baths with their landlords. Often, improved sanitation combined with a perception of improved security (very linked, those two) become the reason for families to opt for moving to a better rental accommodation.

However, as a researcher, what strikes me most is that, despite the whining about sanitation, renters consider poor amenities as part of the deal. They live in the hope that improved income and better circumstances will given them more negotiating power to change these aspects of their lives. But for the present, many women told me that they are fine with the sharing of toilets with strangers, with the waiting for their turn as per their time of work, even with the poor maintenance! They said that conditions in their village were often worse; others said they lived in better conditions back ‘home’ but understood that poor sanitation was the price to pay for the opportunity to live and work in the city.

Access to sanitation, and its strong relationship with dignity and safety, is an important lens through which to understand the integration of the urban poor in our cities. In the context of internal migration, the denial of the basic aspects of citizenship to migrants creates a psyche of helplessness and illicits that shrug, that sense of resignation that I find so frustrating. Because the government buckets private informal rental housing as illegal and no standards and bye-laws are implemented in this context, it is easy for landlords to turn a blind eye to this issue. A dialogue that involves civil society (representing migrants), private landlords as well as government is important to arrive at ways and means by which an increased awareness of the importance of sanitation is created, where the migrant is given a human dimension as opposed to a sub-human one (yes, this is often the case!), big infrastructure to make improvements possible are put in place and new efficient means for operations and maintenance (best practices) are shared and implemented.

We have to listen! Solutions most often come from the community

There are many interesting ways to work with communities. A wide variety of social researchers across the world are learning that there is tremendous knowledge vested within communities and the outside-in, often high-handed, approach used by academicians and policy makers alike can be disastrous, not only because analysis and solutions may be far removed from reality and therefore unsuccessful when applied, but also and more importantly because this sort of approach loses out on the rich understanding that communities have of their environment, the networks that exist among them, their strenghts and weaknesses. Critical knowledge that can make or break their future and that, in turn, can teach those of us from the ‘outside’ that work with them, so much!

Today’s The Hindu carries a piece by Janaki Lenin about Erika Cuellar, a Bolivian biologist who empowered tribals to use their inherent knowledge in mainstream research and be recognized and compensated for it. This is a critical change and an evolving approach in research.

In my experiences with slum communities, I have often had the opportunity of learning from community members. Often, not the leaders, but ordinary members of the community can make astute observations that put us on a path to better design and more appropriate solutions. In the Sundernagari slum redevelopment project that mHS did in association with Mahila Housing SEWA Trust (MHT), the frequent mention of community life as enacted in the streets outside their homes led us to a pathbreaking design that focused on the street (at two levels, on the ground and two floors above the ground) as a space for interaction, work and play, a tool for safety and social cohesion and much more.

In our workshop at the Bhumiheen Camp in Govindpuri earlier this month, I got the chance to see another type of knowledge at work. The issue that stood out in all our conversations here was the low sanitation conditions in the slum. Most homes had no toilets and the community toilets are filthy and poorly maintained; many of the 35 toilets on the male side and the female side were not even functional. I had to see them to corroborate that absolute horror stories we heard. Not a pretty sight!

After the complaining had been done, I engaged the community members in a discussion in an attempt to find the reasons behind the problem and seek possible solutions. Apparently, the toilets used to be maintained by a private operator (charge Rs 1 per use) and were relatively clean, until the current Councillor (a good person, independent candidate, did other really good things for the area) declared them to be free. The maintenance became non-existent; women especially are in a bad shape, complaining of stomach aches and infections, a really pathetic situation. The Councillor is depending on the MLA for funds to remedy the situation, but the MLA is disinterested because he knows he won’t be re-elected when the elections come around. The community, which has represented numerous times on this matter, is caught in the crossfire and they are currently disheartened by the status quo.

I probed into the issue of self-regulation and the awareness of improved sanitation habits, like cleaning up after each use, etc. One gentleman happened to make the remark that ‘renters’ are the ones who leave the toilets dirty, which of course sent me into a whole tirade on how personal hygiene is not related to economic wealth, caste, status or tenure! I was so upset and insisted on knowing why the community isn’t organizing itself to address this issue if it is indeed such a huge issue! I should have expected the reply.

I was told that anyone who takes the lead runs a huge risk of being the object of ridicule and contempt if they fail, and subsequently they also lose whatever social equity they currently have, an important aspect of slum life and one that is traded for money, debt, favors and the like…. and the toilets are an issue that even the local politician has failed to crack! And then, the solution came too. If an NGO or any external organization were to take the lead and outline a strategy, the community members we spoke to felt confident that people would support them wholeheartedly, work for the cause, do whatever it takes to get this done. They desperately need a facilitator, that’s what they were telling me.

And their observation ties up with experiences of development practitioners in a myriad circumstances.They know the solution, they are simply not equipped to take the lead in roping the right people. They have little confidence in their own knowledge or bargaining power, and have been disheartened by recent and persistent failure in negotiation for their needs. Of course, it seems like they just passed the ball into my court and won a battle of words and it’s easy to walk away in scorn, wondering why “these people don’t want to help themselves”! The thought did cross my mind, but I hung my head in shame immediately. Of course they wanted to help themselves. After all, it is they and not me who have to use those filthy toilets every day.

If you have the stomach for it, take a look….