Our voices and efforts can make a difference: Let’s keep fighting! #Delhirapecase

There has been much banter on social networks, much outrage and genuine frustration, a lot of noise, a multitude of voices reacting to the Delhi gang rape. The incident is being seen as shameful, rightfully so; Dilliwalas are feeling ashamed and angry at having to feel so, people from other identities who reside in Dilli have felt a tad better shrugging and being patronizing about being from elsewhere. And so it goes on.

For many of us, the real point of frustration is that this incident will go off the radar and be relegated to the back of people’s minds. Yes, it will happen. Society and human memory are known to be fickle. However, there is a point to making a hue and cry about things. There is a point to signing petitions and participating in protest marches. For all of us who sit in the comfort of our homes, clicking ‘likes’ on FB and feeling frustrated that our genuine outrage will amount to naught, we should not feel so terrible.

First of all, speaking out and putting yourself out of your comfort zone to think about issues that are not immediately impacting you, but could, is a first step to engagement with social issues. In a new way, this sort of engagement spawns new tools for democracies to function. Strong voices emerge that pressurize authorities to take action. Whatever may be our opinion about the actions taken in the short term, the hue and cry has jolted the government into releasing some rules that could be the beginning of a system of checks and balances. Much more needs to be done and civil society is taking up these aspects vehemently. For instance, today’s reports suggest that schools should verify the drivers and staff for buses and otherwise and report and irregularities to the owners/contractors or police. In my children’s school, we recently had an incidence of drunken driving and made the same suggestion to the school. Clearly, preventive measures and checks to identify repeat offenders and remove malfunctioning individuals from positions of responsibility are one way ahead.

On a larger scale, pressure from civil society can lead to convictions and impact judges to change verdicts to harsher ones. The Jessica Lall case, for instance, set a precedent for influential offenders to be brought to book. In law, as I understand it, precedence is an important aspect. So if someone is given a harsher sentence for a rape for this case, it will pave the way for harsher sentences to be given in the future for similar cases. The point I am making is that every little step goes a long way. We need to believe in the power of our efforts, however small, to create change. We need to protect ourselves from cynical dismissal, we need to not give up the fight. Most vitally, while we continue with efforts that address symptomatic problems, we need to broaden our efforts to impact the root causes, which might appear complex but could generate better results over time. Hence, education and awareness, changes in the law and policy, stronger processes are all essential aspects that we can also contribute to. And should, even after this incident has been buried in public memory, to create better cities for us to live in.

The atmosphere of festive bonhomie at India Gate yesterday morning could have fooled some, but there was real anger simmering inside for a lot of us who chose to show our support by walking from India Gate to the President’s home Rashtrapati Bhawan to hand over a petition asking for measures to enhance safety for women.’We want women safe’ was what the event called itself….

The most unlikely people have spoken to me these past few days about feeling unsafe in Gurgaon. A girl who works at the beaut parlor across the road left her job after the latest rape that has triggered the spate of protests. Her friend recounted her personal experiences of being teased, heckled, harassed, a male friend who was dropping her home being beaten up, etc. My maid spoke about not being able to take up work on winter evenings as it wasn’t safe to walk or cycle back to her basti; she spoke of relatives being groped, pushed over from their cycles, people in passing cars trying to pull one young girl in…. Amid the outpouring is a scary sense of helplessness…there must be some way to change attitudes!

On Sunday morning, we saw a group of enthusiastic cyclists (some had come in from as far as Noida and civil lines), many walkers and a show of support from the Harley Davidson club; plus kids on skates, a street play, drummers….the works. I wouldn’t say there were a lot of emotional moments, but everyone felt strongly for the cause and proud of being able to do something, release the frustration and angst that was festering inside. Nupur and me clicked some pictures that document the protest march.

The hashtag being used on twitter for the campaign

Sunrise, India Gate, martyrs us all? 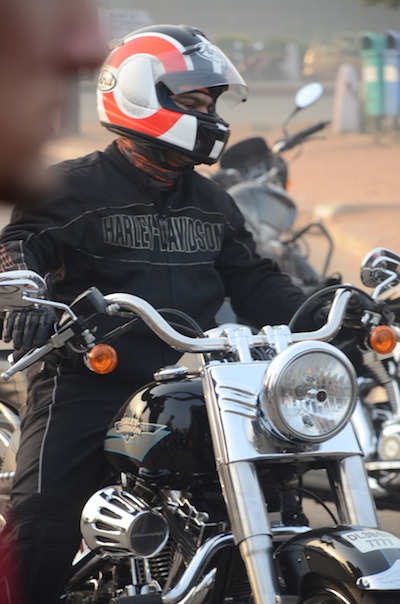 And the Harleys roared...adding a glam element we enjoyed! 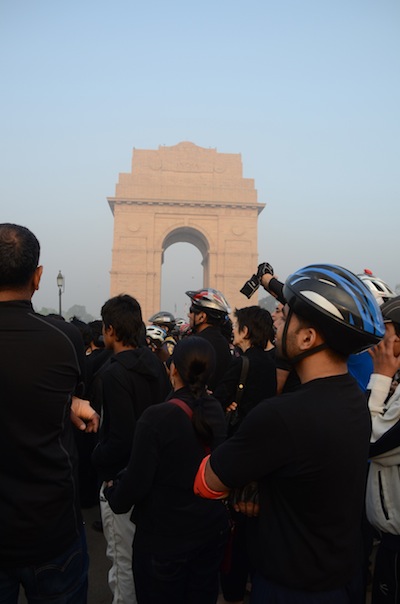 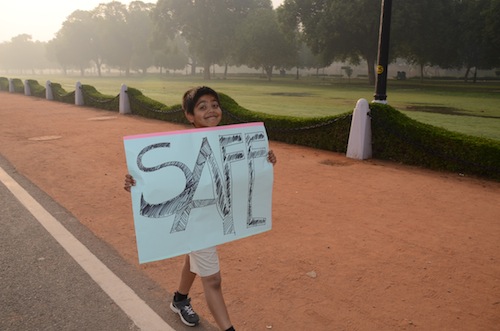 Udai walked all the way and back carrying that. Is it enough to tell an 8 yr old that rape is a 'very bad thing' someone did to a woman? How else could I answer his question? 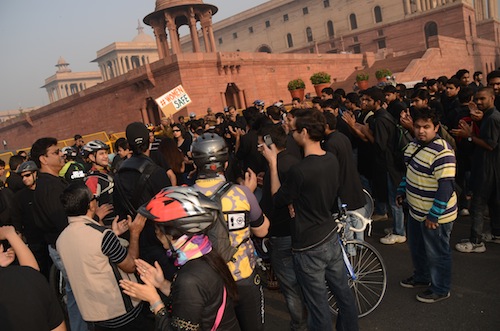 I try and not rant against the system on this blog, but when you read about rape everyday and then it happens in your backyard, it’s just too much provocation! I took a taxi back from the airport close to midnight yesterday and I was glad for the paternal polite sardarji who was my cabbie, while still wondering about whether appearances can be deceptive. I am not a paranoid person, but when brutal incidents happen everyday, it twists your mind, doesn’t it?

And then, to top it all, the police response is to stop women from working in pubs after eight in the evening. Sure, they caught some of the rapists, but I’m not willing to forgive an attitude that resorts to curtailing the freedom of citizens rather than taking measures to increase the safety of our city.

My first reaction, of course, is how easy it is for society (the authorities are reflecting a larger social attitude) to ask women to behave ‘within limits’. Just like recent incidents in which airline staff asked people with disabilities to deplane, the attitude reeks of a mindset in which women are considered weak, disadvantaged and mostly a problem.

Why can’t we do something to promote (among men and potential rapists and everyone) understanding and tolerance, perhaps by creating common platforms to bring people from diverse backgrounds together? Culture and sports, community building activities like planting trees, cleanliness drives…I don’t know. There must be something we can do to stop the ‘us’ and ‘them’ thinking. Urban vs rural, rich vs poor, modern vs traditional, boys vs girls……as a society, we seem to be losing our balance and lashing out against something. And I am, perhaps naively, convinced that rape, brawls and bad driving are symptoms of a problem, while also being problems in themselves and therefore we need to take a larger view and address the issue at many levels.

Of course, there is a disregard for the law and authority, which needs to be addressed by harsher punishments and better policing. But I cannot believe a rapist thinks he is right or isn’t shit scared when the police actually catch him. Then what makes him do it? What makes him not stop? Its insensitivity, the prioritization of his pleasure over anything else, the importance of ‘I’ and our own and the absence of an inclusive sense of community. If I were to actually know a girl who worked in a bar and see her as a normal person trying to earn a living, would I be less likely to rape her? (For that matter, I don’t happen to know a rapist, so its hard to profile one!)

I don’t know how to think all this through. But I do know that citizens have a right to expect governments to act. The action, however, must be long-term and two-pronged and a diverse range of citizen groups must be involved. Protests should convert to some sort of sustained communication, building of trust and spreading the message that crime against anyone is a crime against yourself, your community, your family, your women……..yourself…..