Some places are set up to stay on the list of favourite haunts and Connaught Place is certainly one of these. It’s colonnaded symmetry and monumental scale are pleasing indeed and each time I go there, which is only a few times every year, I return satiated. Of course, nostalgia plays a significant role in this. As college kids, eating joints in CP and around the Mandi House/ Bengali Market area were where we went every Saturday when the hostel mess was shut. Everything in our lowly price band was explored and once in a while, we would pool in to splurge in a place like Bercos, which was pretty much the top of the pyramid for us. Once, a dear friend Somwrita and me spent all we had on buying cold cuts from a meat shop in outer circle and walked all the way back to college (SPA at ITO) munching salami and singing songs. They were simple days and it is endearing indeed that many shops have not changed and I can still remember many landmarks. Much of the charm of CP is in going around it without quite knowing where you started and where you might end up. In time, you figure it out, but until then it is an adventure. After that, coming here is like meeting an old friend!
Tonight, a bunch of us friends had a reunion in CP’s QBA restaurant. The meal was standard, the conversation very entertaining (Natasha, Fuad, Nupur, Rahul and me). There was much ribbing and some semi serious discussions. But to me, the magic moments were when we stepped out of the pseudo exotic interiors of QBA into the charming colonial colonnade of CP. The lighting is well done and the place looks really pretty by night. No traffic sounds, just laughter and conversation of several groups of people saying their goodbyes. Sleeping dogs, sleeping men, it’s all part of the charm ! Take a look. 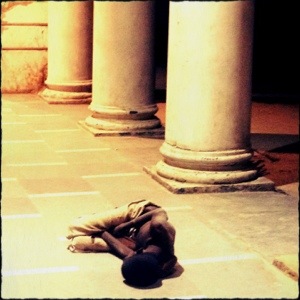