Obviously, I didn’t do much thinking about the architecture of Parel and other parts of central Bombay when I grew up there. Bombay of the ’80s had a distinct flavor about it. I remember it as very working class. The mills were still functional and I have memories of visiting people in the chawls that the mill workers lived in. Now, you drive through a city of dead, decaying mills and tall glitzy (mostly ugly too!) skyscrapers. But what I absolutely love about this part of the city is the street front mixed-use architecture. It epitomizes all the good stuff we keep elucidating about mixed-use. Because the ground floor has street-facing retail shops, pavements must be in good order and there are always people around and about.

Mixed use main road in Parel, built in the European tradition 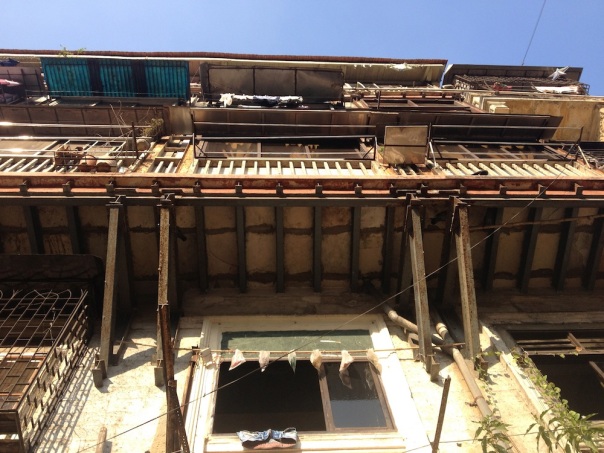 Built concurrent with the industrial age in Europe, iron was widely used as a structural material to build these chawls and mainstreet mixed-use structures

Parel was one of the original islands of Mumbai and came up as a business and industrial district starting the late 18th century all the way upto the beginning of the 20th century. The mills prospered and chawls were built by both the government and the mill owners to accommodate the men and women who worked in these mills. The chawl typology meant sharing a common entry passage as well as street areas and life was lived as much on the street as inside the home, which was usually overcrowded and dingy.

The residential areas are entered through a street that branches off the main roads creating small self-contained residential enclaves. Similar to the katras of Delhi and the pols of Amdavad, you step inside a world of quaint silence and domesticity, a world in which people know each other and your foreign footsteps break the comfortable humdrum of lives.

I got curious stares when I entered Krishnanagar in Parel. It’s beautiful gates beckoned me in. At the entrance, I saw a group of men sitting and reading papers, their red tikas displayed proudly as caste marks, denoting that this as a Hindu neighborhood. There is a temple inside the enclosure, people seem to know each other. Old ladies sat out on the common verandah talking, stitching, some people were getting ready to go to work, a young man was brushing his teeth while staring down at me, a young housewife in her trademark cotton printed nightie was walking her dog…It was a bustling middle class neighborhood with homes that proudly displayed plants, pictures, ornamentation of all types. 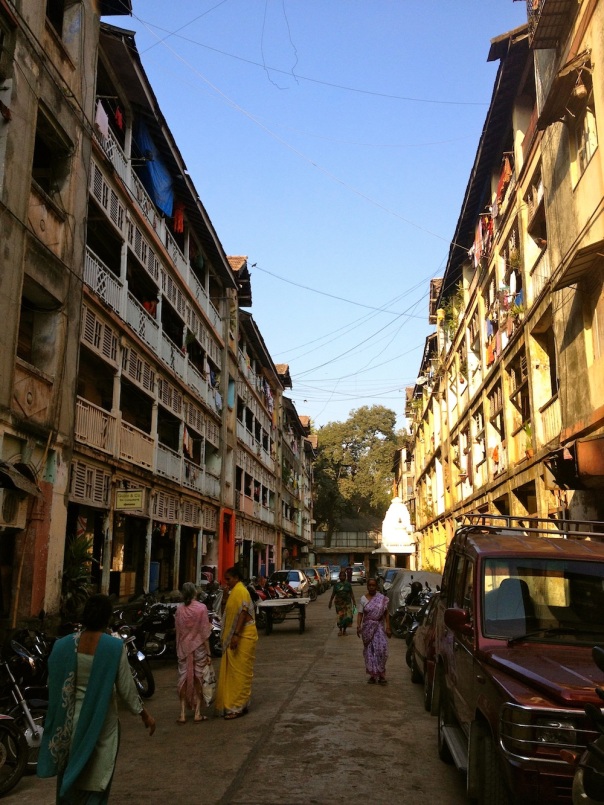 Life inside Krishnanagar had the humdrum pace that was familiar from my childhood in these parts, even though I never lived in a chawl like this

Another shot! Just because I wanted to think about how this might have been a long time ago!

The entrance: Shot from inside Krishnanagar

Pride in their home is something I distinctly remember. Manda mavshi who looked after me when I was a child had relatives who were mill workers. Their homes were always pretty, clean and organized 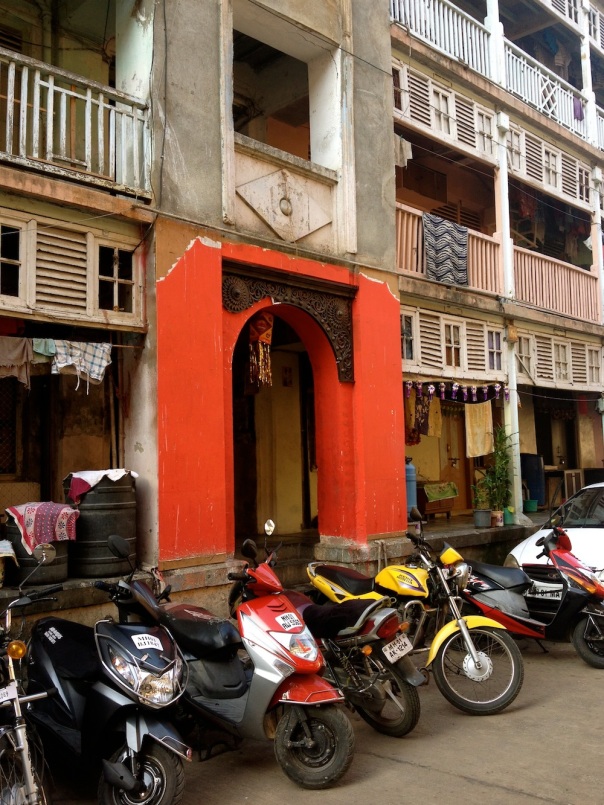 One gentleman stopped me to ask why I was taking pictures. He was reassured by my reasonably fluent Marathi and accepted my explanation that I had lived nearby as a child and was revisiting the neighborhood out of sheer nostalgia. His attitude was not threatening, but clearly voyeurism wasn’t going to be tolerated here!

Uncharacteristically, I decided to enter the little temple and pay my respects to the Gods within. Perhaps that’s what helped me make it to my flight later that day, despite many obstacles, just in the nick of time!

Mixed classrooms are an opportunity to teach our children the values of inclusivity and tolerance- Sep 4, 2012

The social divide is, in my perception, the single largest obstacle between India and progress. The apalling manifestations of this divide strike me everyday. The insecurity of the privileged classes and the growing frustrations of the have-nots can explain many of the negatives we experience around us- all manner of crime, anger, safety of women, and so on. And what’s really scary is that our response is only to build more walls, shrink further into our cocoon. We imagine we are spreading our legs in plush comfort, but actually we are squeezing into a very small mental and cultural space. Already, life has lost much of the diversity and stimulus I remember from my childhood. Our social response to dealing with the social divide by sanitizing our surroundings, making everything in our lives as ordered and predictable and controlled as possible, will only mean more boredom, more and more of ‘sameness’…shudder!

Today’s observations are in the context of education and the outright rejection of the elite to the possibility of mixed classrooms as recommended by the Right to Education Act. A Hindustan Times-C Fore Survey, carried by the HT today, exposes the paranoia of urban middle class parents with school going children. 72% believed the quality of education would decline, but that doesn’t bother me so much. What really struck me were the responses to a question that asked parents if having classmates from a lower economic background would help your child become a less prejudiced person. 22% said yes, an astonishing 55% said no and a substantial 23% were non-committal. Now that tells me a lot and I’m not smiling! Being less prejudiced is not something we even consider a desirable attribute any more. It seems to me that we parents want our kids to be smart, intelligent, successful, have myriad skills that will help them land plum jobs in this competitive world. But we’re probably not too concerned about whether our child will grow up to be a sensitive, socially responsible individual. Nobody cares!

We’ve pushed the capitalistic thought so far into the social consciousness of this nation that social equity isn’t something most of us even consider a desirable. Those of us who are vocal about social equity are considered a bit strange, almost like we are disconnected with reality. But the reality is that masses in this nation face huge barriers to progress that they desperately need and crave for. It’s not just us: everyone aspires for upward mobility, even though that might mean different things for different people. And it’s not right for us to begrudge anyone that right.

We need to code an inclusive approach into our children. We need to get out of the ‘step over someone to get ahead’ mentality and believe that we can all progress together as partners and collaborators. Yes, resources are scarce but there are also many opportunities if we have the right attitude.

Mixed classrooms are a great opportunity to build an inclusive and tolerant mindset in our children. My daughter studies in a mixed classroom as Shikshantar has implemented the RTE this year. The kids seem scarcely aware of the differences and the bonding seems great. Of course, Shikshantar uses Hindi and English both as mediums for pre-primary education, so language in itself is not a barrier. But what I’m trying to say is that children aren’t judgemental at all, unless we teach them to be. And they stand to learn a lot from diversity.

I was heartened to read in the same HT spread on RTE that educationists are a lot more positive about mixed classrooms and despite obstacles, are admitting to this being a positive step forward. Its time we changed our mindsets to allow a new generation increased access to quality education. It could mean a bright new future for our nation, increased security and less strife for the world that our children will inhabit in their lifetime.

We need a new social order to harness the power of frugal innovation or ‘jugaad’ to improve communities- July 17, 2012

Shashi Tharoor puts it succinctly in this article. India has a lot more going for it than the macro economic indicators suggest. He talks about frugal innovation or what we know better as jugaad. This is a cornerstone of the Indian psyche. Whatever be the situation, Indians will find a way around myriad obstacles to get ahead.

It puzzles me that this jugaad mentality of finding innovative solutions to problems both simple and tricky does not extend to community issues. We Indians are comfortable thinking in terms of the family unit. In the days gone by, the biraadari, loosely translated as the community, was based on certain elements that bound families together. Caste and sub-caste played a strong role here and this had a correlation with the occupation and therefore lifestyle, that included eating habits, dress codes, language, mannerisms, social structures and codes of conduct, etc.

After independence, India has struggled to establish a democratic society despite the fact that most Indians associate themselves with a biraadari or kaum; that is what drives their identity, that is where allegiances lie, the people within the biraadari are ‘us’, everyone else is ‘them’. This sort of thinking has posed as an impediment to the establishment of a nationalist thinking as well as to the nurturing of democratic values.

Modern societies, especially in the urban context, are diverse and multicultural. People from an astonishing array of backgrounds live together in new forms of community, like apartment blocks and gated colonies, or work together. It will take us time to establish common ground that is not based on the traditional concepts of biraadari. I see this where I live. Despite being educated, serving or having served in government service or the armed forces, or in senior positions in corporate organizations, I observe that people often feel most comfortable forming groups that have caste and region as the binding factor. Religion, of course, and language, are very strong elements in social interaction across age groups. Younger people do deviate from this trend, and world view, political leanings, income class and aesthetic tastes become differentiators basis which we decide who our friends are. Perhaps this is because they are idealistic and still willing to trust most people; they haven’t been stung by the bug of cynicism and social interactions are not about seeking safe havens, but about creating excitement. I would like to think that a new social order is emerging in urban India, but to be honest, the robustness of this new order remains to be seen.

I have no doubts, however, of the urgent need for this new social order. The creation of new common ground for people to come together is essential so that we can harness the power of innovation for the community, not just to further individual aspirations.