Watching my children grow and hearing the absolutely astonishing things they say and do, I often try and remember what I was like when I was a child. Of course, I cannot. We only know partly what we were and a lot of what we think we know is informed by what older people have told us of our past selves.

This morning, Udai lost one tooth in a really fun way. These two front upper teeth had been hanging loose for weeks. He was to go see a dentist today, but even before that, in a little squabble at waking up time, Aadyaa punched one tooth out of Udai! Now instead of that becoming a full blown fight, we had a whale of a time squealing in laughter, with Udai thanking Aadyaa and the little one admiring this fallen tooth, this hallowed symbol of being grown-up-er!

Udai then went about trying to distract the rest of us so he could hide this tooth in a secret place. Was it so exciting for me, this breaking of my milk teeth? I don’t remember, though I do remember that ritual of my dad tying a thread around these hanging teeth and yanking them off by tying the other end of the thread to the door knob and banging the door shut! I also distinctly remember that feeling of pushing the tender gums around the newly appearing teeth, constantly feeling that gap in a bitter sweet pleasure (I was amused at hearing myself tell Udai not to do this because the new teeth would come out crooked, why do repeat the stuff we hated to hear as kids when we become parents).

These past few days, my children have surprised me in many ways. In Ramgarh, I discovered that Udai is no longer a slightly timid boy who fears taking risks. Instead, he became the lead walker in our small treks, negotiating little slippery patches and jungle streams with confidence, finding the right path and helping us across. I saw his concern for his grandmums, me, Aadyaa, all the women in his life. I admired him, and was touched as well. I also found out that Aadyaa is an unending well of energy, who can walk far more than I had imagined and is up for challenges all the time! From a rather demanding and attention-seeking toddler, she is turning into a well mannered, reasonable little girl, able to keep herself busy and make intelligent enjoyable conversation. Moreover, I found that the siblings had decided to bond, spend more time in harmony that in discord and that certainly made the holiday far more enjoyable! Making and flying paper planes from a book Udai had carried accounted for a lot of the time spent. No TV, no ipad, no phone games….quite the break it was!

All set to go hiking! 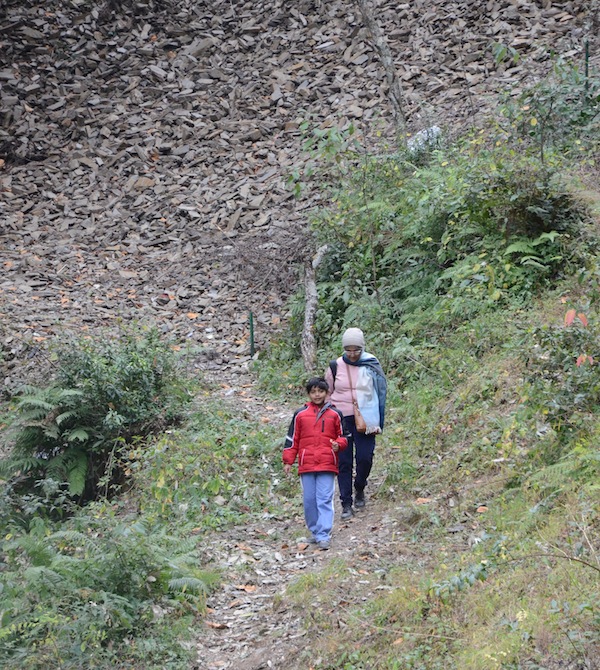 Savoring the nature on the way 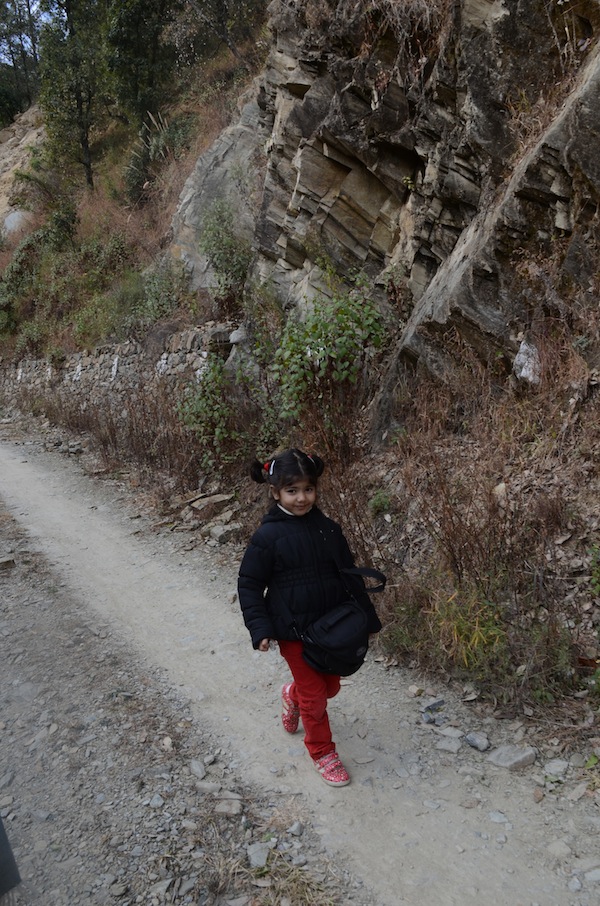 Keeping pace with all of us

The infamous rape incident in Delhi has also changed things in our home. Udai has been an avid newspaper reader for a while now, focusing on the sports pages but scanning all else as well. But now he points out to me tips for women to be safe. He read out rape stats to me by state yesterday, telling me that Uttarakhand (“where we have come from”) was the 2nd best state for women’s safety, etc. Of course he does not technically understand what rape is, but he does know that it is something “very bad” that men do to women, that rape happens because men believe women are inferior, that women and men are equally capable and deserving of respect, etc…..I actually asked him about what he made of this and this is roughly what he told me, no kidding! Partly, he overhears discussions at home and he knew I would want to hear this, but even so….for a boy not yet nine, to glean this from news reports and conversations and take a position on it seemed pretty mature to me.

I am sure many parents are astonished about how their children are reacting to all the awareness and activism around us right now. In times like this, children grow up faster. Their inquisitiveness propels them into unknown terrain and they put pieces pf the puzzle together pretty fast, and well (of course it’s up to us to help them and not mislead, over-protect, hide). Yet, they remain innocent. It’s a wonder that flies in the face of our belief that certain things are ‘adult’ and other things are for kids….