It is a running joke between me and my husband Rahul that I’m not really interested in travel destinations that do not involve foraging around among ruins. I vehemently denied this the last time we discussed a possible vacation. I love the beaches and the cruise ships, the road trips and the backpacking just as much as everything else, I said. But I can tell you I was delighted and amused in equal parts when Sumant mentioned a visit to the abandoned ruins of the original Dhanachuli village during the first evening of our weekend getaway to Te Aroha earlier this month!

Our planned excursion was delayed by a day thanks to nightly precipitation that left the path wet and slippery, but we were determined to go. Sunday morning found an enthusiastic group (comprising Vijay, Vibha, Aaditya and me guided by Sumant and a kind and generous staffer from Te Aroha) making its way down into the beautiful valley. Shortly after we had crossed the existing settlement that hugs the road, we got a taste of what was in store for us. An abandoned home, colonial in its proportions and bearing, but with the wooden carved doors and windows characteristic of the original homes in these parts. The stop vetted my appetite for more. I could see from Sumant’s expressions that this was the tip of the iceberg and an excitement gripped me for what was in store further below. 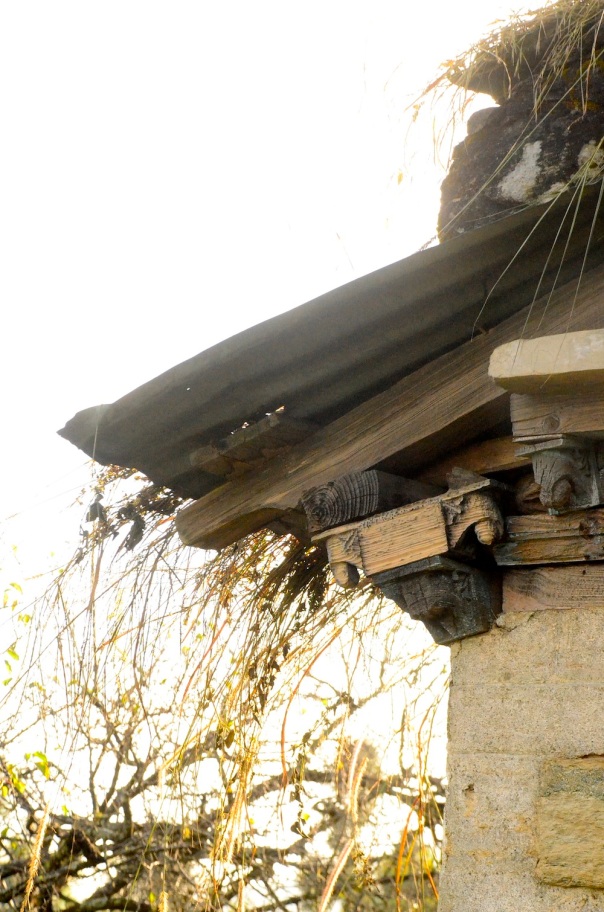 Facade. I find the fusion charming, though the intricate carving doesn’t quite fit the robust proportions of this house, do they? 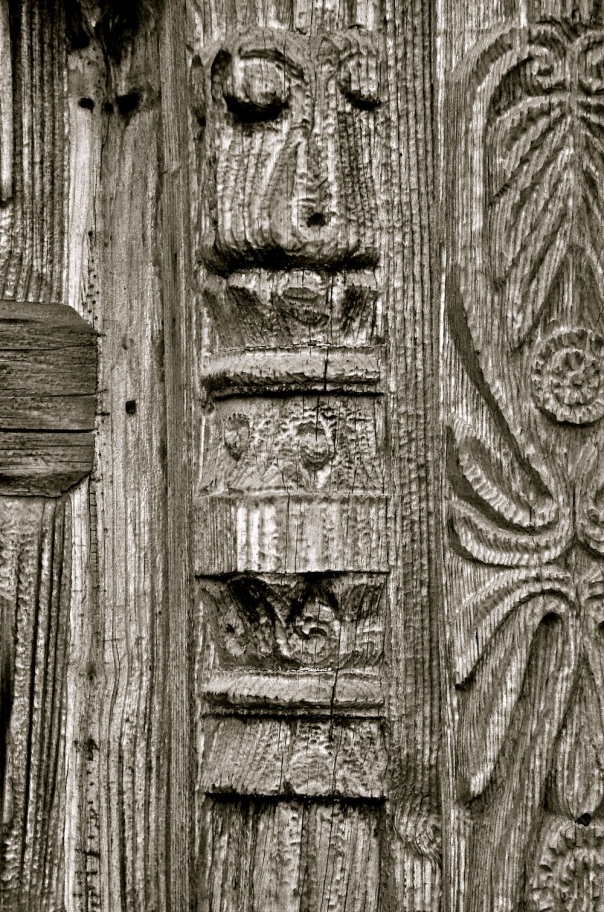 Detail. I would surmise this is a relatively newer home and the carvings aren’t as intricate as the older ones. Perhaps the type of wood available changed, perhaps the better craftsmen were no longer available…

Wood structure, slate tile roofing and then lots of grass drying on top…great pic to make a section of the roofing huh, architect friends?

A glimpse into the valley we were descending into….

After maybe twenty minutes of walking alongside fields of corn, cabbage and peas, we started seeing the first homes in the settlement below. I was struck by the play of light on the beautiful stone masonry on these homes. Some roofs were caved in and the roofs were overgrown with grass. Hindu symbols like the trishul were clearly visible. Our sense of anticipation heightened and soon we were rewarded with the beautiful sight of the little cluster of original village homes that we had trekked all the way to see.

The story goes that upper caste Hindus from the plains, from areas as far as Rajasthan and Gujarat, escaped forced conversion to Islam and moved into hilly terrain. The homes in the village therefore date back to anywhere between 150 and 200 years. Here, they settled down, amassing large land holdings and building these beautiful homes using local materials and the skills of local wood craftsmen from the Jhonsari community. However, they influenced the craftsmen substantially in the motifs they would use, typically snakes, fish, elephant and various other revered Hindu symbols with hints of Islam-influenced motifs as well. And in the shape of the niches, which are exactly like Rajasthani jharokhas. We could see Islamic influences in the types of arches used as well as in the typical geometric patterns of the carvings on some of the doors and windows. We stared, stitching the narrative of this fascinating time in history in our heads, imagining what it must be like for families who made this drastic move and how they must have hankered for small motifs and icons that served as reminders to what they left behind, that became a fragile but intensely beautiful link to their shared history and identity.

First glimpses of these spectacular houses

I found the elevation interesting. The bottom floor is for animals, so you ascend the dwelling itself through a single flight of stairs entered through that tall arch. This row of homes are perfectly symmetrical too!

The carvings on these older homes are more intricate and diverse in terms of patterns and motifs.

Love this pic! Thanks Aaditya 🙂

Many of the homes are already completely ruined 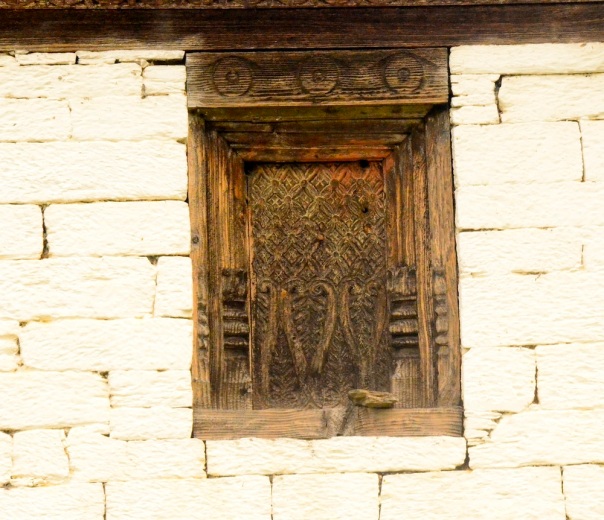 This particular house took my breath away with the detailing 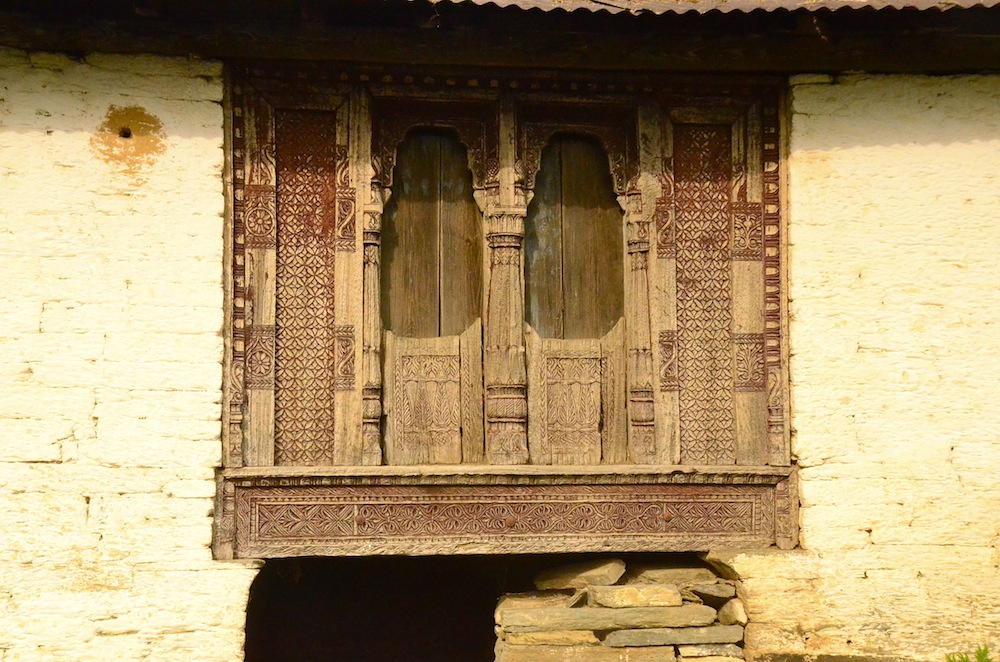 Notice the geometric patterns like the floor patterns in Mughal architecture

There would have been an archaeologist’s pleasure in walking through these ruined homes, but it wasn’t just history we were looking at. We found occupied homes as well in this little hamlet. Cows tied in the lower level under the exquisitely carved windows. A dish antenna screwed onto one of of the carved panels. This is living heritage, a cultural landscape that deserves attention. The contrast of the abandoned homes, to the ones that were used only for storage and the few that were still lived in told a story of economic change and loss of patience. Families had migrated up the valley towards the road, where livelihoods could be found catering to the tourists that passed by on their way to Mukteshwar as well as to the locals who lived in the village still. These homes still stood because they mean something to these people. Some are even propped up by new wooden pillars in a bid to save the roofs from caving in, but clearly no new investments are being made here.

The pictures clearly show that there is value in this heritage–the value of craft, architecture, a slice of history, a way of life. One way to conserve this heritage is to buy these beautifully carved frames and doors from these owners and cart them off, to be lovingly restored and installed in a swank, elegant and even opulent residence or heritage hotel in Delhi, or Mumbai. The other option is to find a way to conserve these homes in their original location, involving the local community in an effort that would not only augment revenue through targeted tourism and a renewable of the crafts, but also renew their bond with their rapidly disappearing material culture. A culture that spoke the language of wood and stone rather than brick and reinforced cement concrete and one that had space in it for art.

Sumant mentioned he would be happy to support, in part, a group of enthusiasts who could get together to showcase this delightful slice of heritage. Filmmakers, conservationists, artists and people engaged with the concept of responsible and sustainable tourism can join hands to save this hamlet from destruction. I think it is a fantastic seed of an idea that we could develop into a more meaningful pursuit.

Aside from having a good time with my girl friends, some new some old, the focus of my outing to the Doab region of Punjab was the chance to see the Virasat-e-Khalsa museum that opened in Anandpur Sahib only in November last year.

Moshe Safdie, an Israeli architect won the international competition to design the museum, then called the Khalsa Heritage Memorial Complex way back in the early 90s. We must have been first or second year students at the School of Planning and Architecture (SPA) when he came to speak to us about the design, the concepts behind it and his vision for this monument. I remember thinking it was rather outlandish (scroll down this page to see the sketches he must have shown us), but I was impressed by Safdie’s self-assured demeanor and exotic accent!

The museum was our first destination and we went there just as soon as we had dumped our luggage at the Bharatgarh Fort (will blog about that quaint place tomorrow!) and gulped our evening tea! It was a Sunday and the crowds were overwhelming. For a museum in rural Punjab, I was pretty surprised. 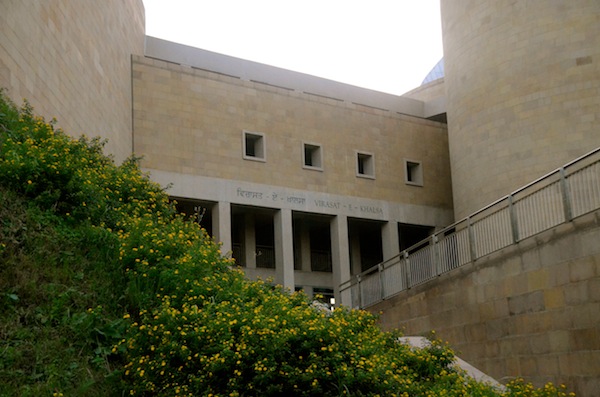 Entrance- At this point, I have no clue what to expect inside!

We were ushered in by a smart police officer of few words who our hosts, the local royal family had requested to assist us. Our cameras and bags were kept in lockers by a smart young man who spoke good English, besides Hindi and Punjabi. In a few moments, we found ourselves in the middle of an audio-visual treat. Orijit Sen and his 13 collaborators have created this 3D panorama of life in the Punjab- a three floor high mural full of color, depicting daily activity, people and cultures, rural-urban transitions, rituals, celebrations, street scenes, architectural sections of traditional typologies like havelis and caravan sarais…..all accompanied to sounds depicting seasons, local music. It’s hard to explain. All I can say is that you start the experience here on a most unusual note; it’s not what you expect from a museum that claims it is about Sikh history and heritage!

The rest of the galleries- and there are 14 open at present out of a planned 28- did depict that history, but it was far from boring. Fabric, texture, other unusual materials, light and an array of crafts have been used to stunning effect to depict the evolution of Sikhism and the life of the main Sikh gurus. At no point does the content get preachy or overtly religious. Audio visual displays puncture the visuals and text to make it easier on the senses. Hordes of villagers from surrounding areas pass through,awestruck and absorbed. This is a world class museum that isn’t just for the elite and the lovers of history and art. It’s for the people who live the heritage it depicts.

It was dark when we stepped outside again and the magic of Moshe Safdie’s architecture hit us like a punch in the stomach. The lighting highlighted the bold form, the water body created an added dimension of playful reflections. Serene and monumental, the walk around the museum transported me into another world. A full moon added the poetic touch. After a long long time, was I affected this way by the sheer power of architectural design. For all those of you who are architects, or think they have it in them to appreciate architecture, the Virasat-e-Khalsa is a must-visit. Bundled with the peacefulness of the Gurudwara next to it, it’s a pilgrimage for the eyes and for the spirit! 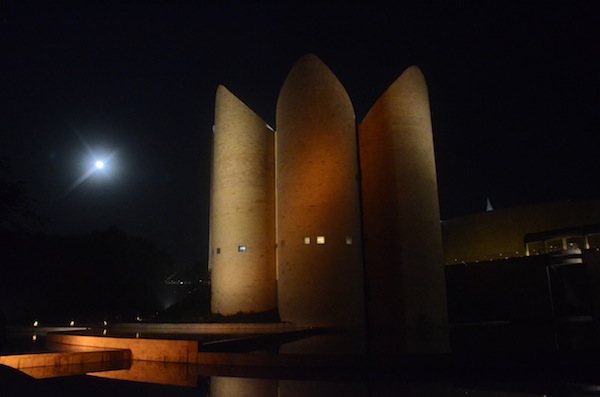 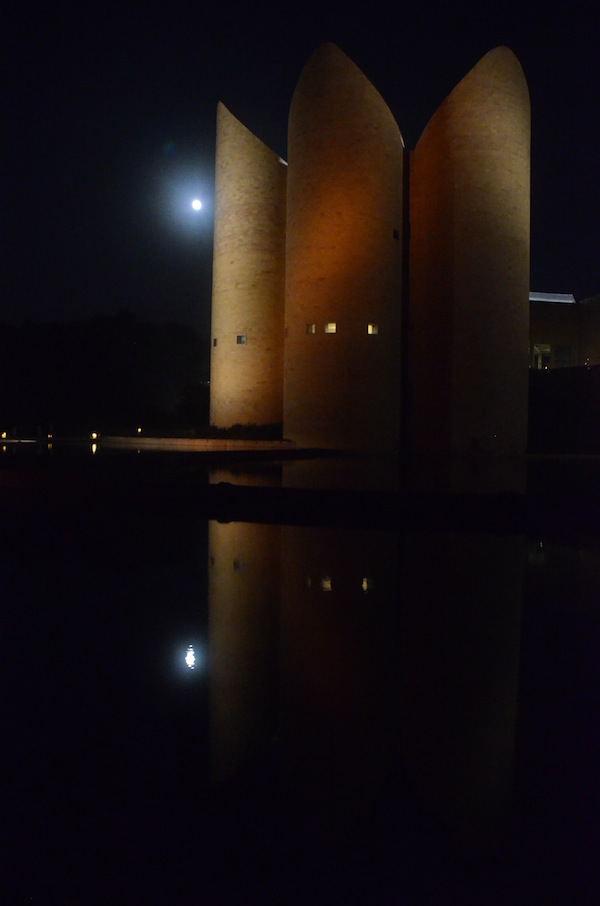 To visit the museum, drive to Anandpur Sahib near Ropar. It is about an hour and a half from Chandigarh and the roads are excellent. The museum is closed on Monday and Sundays are usually crowded. The audio guide is available in English, Hindi and Punjabi and is excellent, we were told by our hosts.