← Could we – should we – stop migrants coming to Britain?
Conference paper: Vibrant small cities can keep rural youth closer to home →

Global #capital and the impending #housing crisis in India’s #smartcities

With the Indian government easing FDI norms in real estate and construction, the country’s large and ambitious real estate sector is hoping that an influx of global capital will up business. For a country that is looking to urbanize rapidly and is opting for a ‘smart cities’ route to do so, global capital is particularly vital at this time.

Mumbai skyline: Global capital is the driving force for cities and shapes the way we imagine cities too 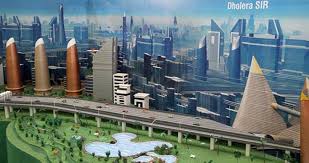 Visualization of smart city Dholera in Gujarat, which is on the Delhi Mumbai Industrial Corridor

In the imagination of real estate developers (private and public), capital inflow translates into greenfield developments, sprawling out of existing urban centers as well as in the form of utopian visions like smart cities proposed by PM Modi and propagated by the likes of Amitabh Kant. The 100 smart cities mission of the government, being taken up by the Ministry of Urban Development, proposes the retrofitting of existing cities (satellite towns and mid-sized cities). Clearly, developers and politicians have their sights not just on bringing rural land into the fold of urban, but also are looking at redevelopment of inner city land to fit the new idea of the ‘world-class’, networked, efficient and competitive city. In other words, a smart city, that will be attract global capital and be built by it as well.

This same ideal of the smart city also hopes to achieve better standards of living for its citizens. Better informed and networked citizens are envisaged to be more skilled and productive, more robust infrastructure is expected to deliver services and amenities “comparable with any developed European city” (as quoted in the concept note on smart cities on the MoUD’s website).

This is the vision. In reality and on the ground, how will global capital transform our cities? As an urban planner with a specific interest in housing issues, I think this is a critical question.

The experience of cities like London, which faces a debilitating housing crisis, is telling. Aditya Chakrabortty’s piece in the Guardian eloquently describes the bizarreness of the London situation: Here is a city where global investments in real estate have meant that poor and even middle class Londoners cannot buy a home in the city, end up paying substantial rental payouts to absentee landlords who live in Singapore and St. Petersburgh!

In India, both Delhi and Mumbai have historically used slum clearances as a tool for freeing land in the inner city; land that is often used to attract capital, some of it global. With the influx of global capital, one can argue, evictions and mismanaged resettlement schemes will become more common, unless a real effort is made to find a socially sustainable way to accommodate the urban poor in the city. The discussion on ‘right to the city’, while trendy among academicians and rights-based activists, has unfortunately  found little resonance with private developers nor a buy-in from the State. 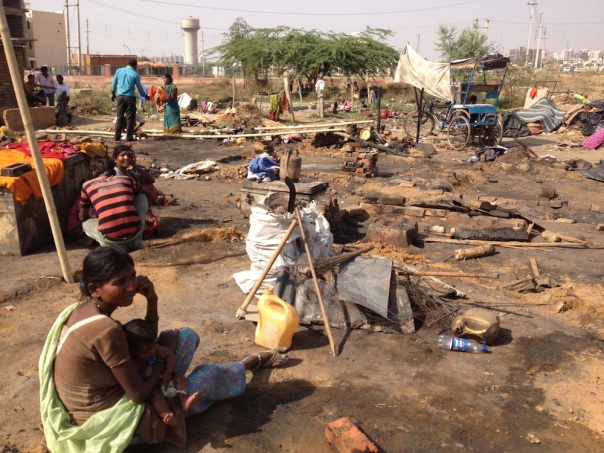 Evicting the poor to acquire land for development is not uncommon in Indian cities. Gurgaon takes it to a whole new level; first allowing the poor to illegally rent undeveloped land, then torching down their hutments to reclaim the land! Photo: March 2012, Gurgaon

Gentrification, that is the ousting of older (and usually poorer) residents of a neighbourhood with newer (and better off) ones, is likely to be the norm in the era of urbanization driven by global capital. As late Scottish geographer Neil Smith, who taught at the University of New York wrote in the Antipode, “the impulse behind gentrification is now generalized; its incidence is global, and it is densely connected into the circuits of global capital and cultural circulation” (Article titled ‘Globalism, New Urbanism: Gentrification as Global Urban Strategy’ Volume 34, Issue 3, July 2002)

The rapid conversion of inner city areas in Indian cities to posher, more expensive real estate is happening right before our eyes. What’s more, relatively new cities like Gurgaon have been planned and built entirely for the educated elite, leaving no planned spaces for the urban poor and indeed, with the rise of global capital, for the middle class. So, similar to London, many of Gurgaon’s middle income families rent from NRIs who live abroad and will continue to do so for a long time. This is because the houses they want to live in that are in the city centre is unaffordable and the housing they can invest in will be inhabitable (in the sense of being linked to functional needs like services, roads, schools, offices and shops) for a long time to come!

As for the poor, housing is only available in the form of rentals in under-serviced areas of the city like urban villages, illegal colonies and slums. The link between poverty and housing  is water tight; secure housing is a necessary ingredient in addressing poverty. And if cities (which are oft-quoted as the engines of economic growth) no longer have addressing poverty as one of their prime objectives, what exactly is the purpose of urban development? Making the rich richer, an end in itself….?

It takes no rocket science to figure out that the Indian smart cities in the offing will need to do some smart thinking on the issue of creating housing (and infrastructure) for a wider variety of its inhabitants. The pursuit of global capital would need to be tempered with some even-headed thinking on utilizing this capital for long-term benefits, chief among which must be reducing poverty and improving living conditions for all. There are lessons on land markets, spatial integration and participative planning out there that must be taken into account while planning these smart cities.

← Could we – should we – stop migrants coming to Britain?
Conference paper: Vibrant small cities can keep rural youth closer to home →