← Politics and urban geography: Do the poor have a voice or a place in Indian cities?
3 churches and a basilica: Exploring Bandra’s Christian heritage →

Another mega park, but what are the real benefits?

Uttar Pradesh Chief Minister Akhilesh Yadav shared this photo on his Facebook page yesterday, with the title- “I would like to share with you the first exclusive pictures of Janeshwar Mishra Park. This 400 acre Global Standard park has a beautiful walkway, water bodies, jogging track, cycling track, landscaping and much more.” 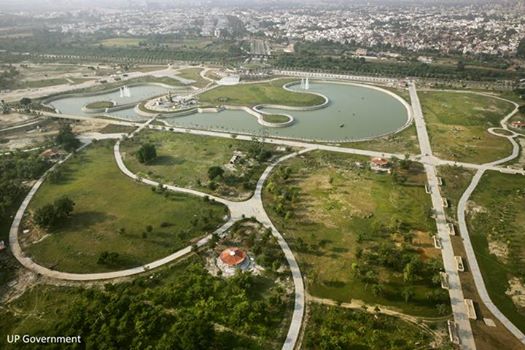 I grew up in Lucknow and have strong linkages with the city. My attachment to Lucknow urges me to ask three questions.

2- Whose land was this and the older park developed on? Were there slum evictions involved? Akhilesh Yadav has made a press statement that implies that the park was conceived to “save the land from land mafia”? What does that even mean?

3- How does a city that desperately needs affordable housing justify a project that not only consumes a large tract of valuable land but also is sure to push property values and housing costs further up?

To offer a background, Lucknow has the dubious reputation of being a city that is in denial of the existence of slums! The municipal corporation doesn’t report any slums in the Census 2011! Yet, the State urban Development Authority estimated in 2000 that 11% of the city lived in slums. In the absence of any substantial addition in the housing stock of EWS/LIG homes in the city and with continued increase in urban population (decadal growth rate has been around 40% for the past decade), one can only imagine that those living in substandard housing with insecure tenure would have increased, not come down to zero. 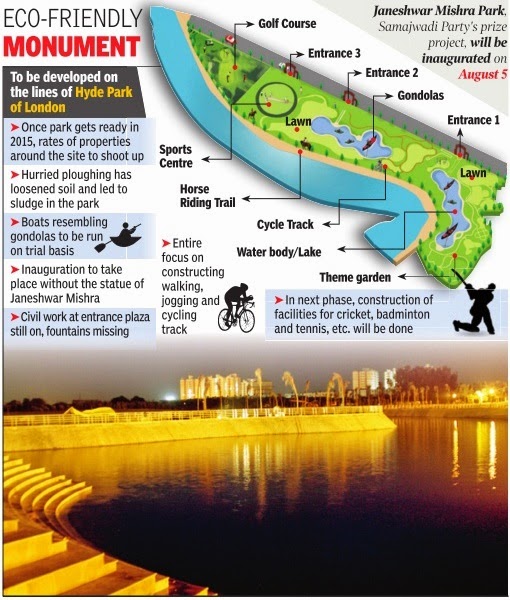 A press analysis of the park. Sourced from 20twentytwo.blogspot.in

While I very much appreciate the creation of  green infrastructure and open space in the city, I see the park as another proof that city governments in India are obsessed with beautification projects and have very little vision or interest in what the city actually needs. I would have much appreciated the integration of such a project with meaningful amenities for the city. Golf courses (the city already has a functional golf club) and horse riding are clearly exclusive. Why not a govt-run public sports complex instead, open air gyms and an urban forest, not manicured lawns? I would be curious to see what the park’s designers (I believe they are from IIT Kanpur for hydrology and SPA, New Delhi for design and layout) have to say about its impacts on the city’s air pollution or groundwater levels. Despite its multiple ‘green’ features, I would like to ask whether their plan relates to the city’s needs for environmental sustainability. Also, was there any public consultation on what kind of public space the residents want or need?

To the CM, I would like to offer a piece of advise. Move the propaganda around these mega park projects moves beyond beautification and to the real stuff. I know you will not answer my provocative questions about urban poverty and elitism, but do ask your PR department to talk about the real benefits of this park if indeed there are any. We, the public, would be very happy to know how this beautiful park will contribute to a more sustainable, economically strong and socially inclusive Lucknow.

← Politics and urban geography: Do the poor have a voice or a place in Indian cities?
3 churches and a basilica: Exploring Bandra’s Christian heritage →