← Memory tools: A bombed out church turns into urban scale artwork
Not a brick in this Wall: Profoundly affected by the Berlin’s history →

Rained out at Checkpoint Charlie

Nearly everyone who’s been to Berlin, every travel website and brochure, puts Checkpoint Charlie at the top of its list. And so, after a look at the insides of Nikolaikirch, we set out to tick the infamous CC off our list.

Historical info: Checkpoint Charlie was the crossing point between East and West Germany, manned by the US. It is perhaps the most poignant physical symbol of the Cold War along with the Berlin Wall itself (post coming soon), which was built to prevent East Germans from crossing over to the other side.

As luck would have it, we were rained out before we got there and it was a bit of an anti climax to see the poor guards positioned there (for touristic value only, I presume) scurrying around for umbrellas, not looking one bit stern but rather, hassled and helpless. The sad stack of cement bags was something we folks from Delhi see at every Metro station and for some reason, despite knowing the enormous historic significance of this point on the earth’s surface, I wasn’t really impressed! The lines to get into the Checkpoint Charlie Museum were long and forbidding and we did not even try. Plus, the place was way too touristy, advertising itself blatantly to American visitors complete with morabilia stores and even a giant Mc Donald’s that looks straight onto CC!

We detoured into Mc D’s for a pit stop (a mandatory visit thanks to Aadyaa who is something of a loo-tourist!) and ate a sausage or two off a streetside stall. Udai then had the bright idea of asking someone where The Wall is (he was obsessed with the task of finding the remains of the Berlin Wall) and off we marched to explore some more… 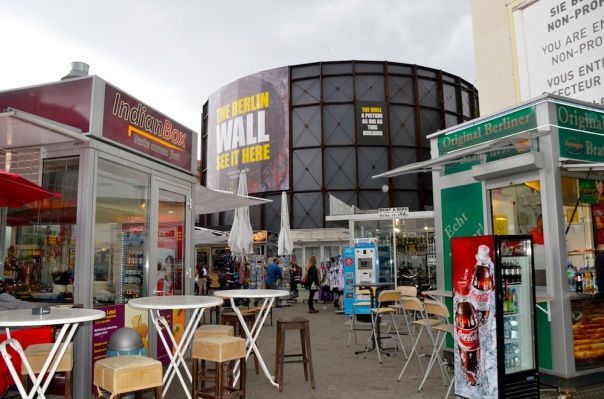 ← Memory tools: A bombed out church turns into urban scale artwork
Not a brick in this Wall: Profoundly affected by the Berlin’s history →