Woes of the Tiger Mom! The sweet-n-sour nature of being a parent

As my closest friends will know, I’ve been having growing up pains about Udai. All of nine, he has been in a broody, sensitive, rebellious frame of mind for the past few weeks. With holiday time meaning a complete lack of structure, it has not been easy to steer him into spending small amounts of time doing things that are not always appealing- in particular, written work and music practice have been a challenge.

We have always tried to let our kids be, or that has been the intention at least. We’ve taken care to put them in a school that lets them be as well. And it’s been a rewarding experience for the most part. But as Udai moves toward middle school and I see him reluctant to rise to challenges, I do worry. I have no benchmarks for comparison; we all went to conventional schools and grew up in homes where discipline was a big part of our lives and questioning authority not acceptable. Of course we did our share of rebellion, but perhaps I have forgotten about my own experience of the confused state that entails being a pre-teen!

Anyway, the first time I began to agree with the idea of discipline and the parents-do-know-better thinking was when I read Battle Hymn of a Tiger Mom by Amy Chua a couple of years ago. Thinking back, I hated my music classes too on certain days, but my parents gave me no choice and coaxed and perhaps even badgered me into it. In time, I developed that special bond with music that I cherish today and this is the sort of example Chua uses to support her hypothesis that American parenting is mush-mush and Indian and Chinese parents are doing the right thing by deciding what’s good for their kids and being strict enough to enforce their will

The thing is: How do you explain that process of growing to love something that initially seems imposed, to a 9-yr old? I talk about my own experiences as examples, but I see in his eyes an unwillingness to engage with what I say and also a sheer inability to imagine a future that spans several decades!

Added to this is the fact that Udai has high expectations of himself, but has not yet developed a mechanism for him to be able to accept criticism in any constructive fashion. His defense for performing a task shoddily, therefore, is the I-am-not-good-enough sort of pseudo self-battering that could, if left unchecked or allowed to grow, turn into lingering low self-esteem. I do realize that even very well meaning parents can burden their children by constantly voicing their expectations and that this can make for that child growing into an adult who is constantly seeking approval and struggling to gain confidence.

In theory, I would rather Udai grows up to be an average student who is happy and follows his passions, but in reality I, like any other parent, long for him to excel and achieve what I think is his potential. The disparity between these two constructs is enormous and it isn’t practical to think one while practicing another, I know.

I am venting on my blog my sheer guilt after this morning’s battle (regular feature now), and I have encouraged Udai to vent his feelings as well. Check out what he wrote! Now we sit relatively at peace, each of one of us, Aadyaa included, on our own separate devices 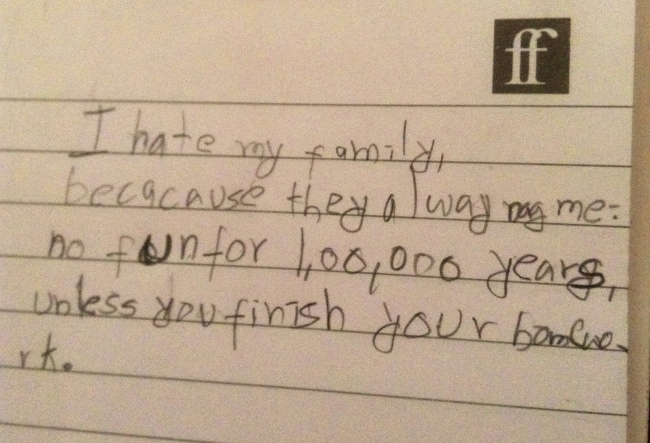 , immersed in our work. I know I need to back off, calm down and I will get to it. For now, we battle and lock horns and that’s how we move a few steps ahead!