← Making math fun for young children: An inspiring talk- Apr 29, 2012
A vibrant construction industry based on shoddy treatment of laborers? Shame! 1 May, 2012 →

Children always surprise us: Notes from our weekend club- Apr 30, 2012

We have a weekend club going about once a month for a few children. Usually, one of the parents facilitates some interesting activity and this time I volunteered. The idea was to get the kids to think and write creatively, focusing on narration.

The children, seven children aged about 6-9, were first asked to talk about their current favorite book or story, highlighting what they particularly like. Words from their narration were written on chits, which were then folded and placed in a box. The chits were jumbled and each child picked about 4, using which they had to come up with a story of their own, in written!

The results varied, but some attempts were pretty amazing. Aarush, younger than the rest, made up for lack of writing speed with his brevity. He wrote :

Once aliens invaded the galaxy. they used to be eating dictnory’s for power. the aliens were as stupid as idiots. like if sombody said something to them they jumped about.

I’ve transcribed the spellings and punctuation precisely to indicate that skill levels have nothing to do with how well someone can narrate! This was simply amazing. The other kids were also quite appreciative.

Nitya’s piece was notable as well, in which she described the joy experienced by a geeky kid who got to spend a day with his favorite author Roald Dahl. Most interestingly, they “ate ice-creams, they went to a movie and had lots of fun.”

The second exercise split the kids into two groups. They were each given a picture cut out from Lonely Planet Magazine. They were to include the picture in a verbal narration. One group, which included Udai, Utsa, Aarush and Aryan (below), chose to each make a story; then they found a clever way to weave it all together into one story and they took turns to narrate different bits. Nicely and confidently done. 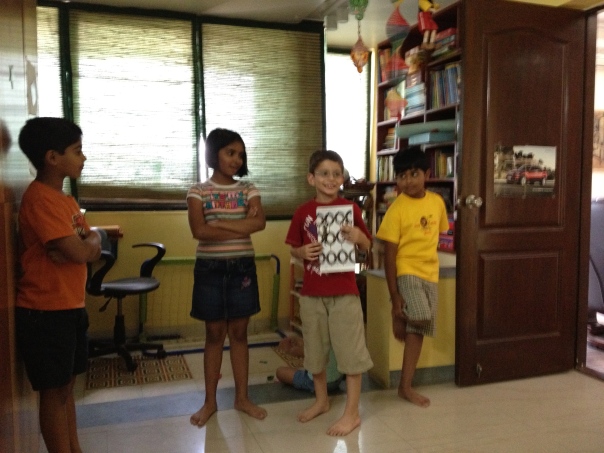 A confident narration of a story built through teamwork and consultation. Kids make this stuff look so effortless!

Sushant and Nitya (below), on the other hand, decide to dramatize their narration, even weaving the toy wooden horse into the tale and using it as a prop!

There was lots of movement, well delivered dialogue and clarity of sequence in this dramatization. Little Aadyaa (at the back) thoroughly enjoyed being a spectator in this entire workshop!

Medha, who had opted out of this activity, was a bit sulky at this point. To cheer her up, I gave them a short lecture-demo on how a solo actor can essay multiple roles on stage, or show the audience that there are other imaginary people with her on stage.

Four children chose to go solo with the ‘dramatize a picture’ format. Medha did a really professional puppet show (I was so engrossed, I don’t have pics!) using the little half wall in the room (she was quick to spot that opportunity, totally appreciate that!). All the others did a great job of incorporating the elements I had spoken of in their little skits. Pretty amazed we were to see how quickly they picked up the nuances and were able to translate it into their own imagination and the context of their narrative!

Well done, kids! We have a lot to learn from you all…..

← Making math fun for young children: An inspiring talk- Apr 29, 2012
A vibrant construction industry based on shoddy treatment of laborers? Shame! 1 May, 2012 →