← Practices evolve, but the spirit of holi endures: Innocent love, playfulness and looking beyond appearances- March 8, 2012
From theory to action: Time to shake off the inertia? March 10, 2012 →

Congrats El Paso, for your new smart growth plan- What a transformation since our 2000 visit! March 9, 2012

I just learnt that El Paso, a city in Texas bordering Mexico and currently the 19th largest city in the United States, won EPA’s smart growth award this year. I remember visiting El Paso in the winter of 2000. It was Christmas day and Rahul and me drove down El Paso’s mainstreet several times before finding a restaurant open for dinner! Thanks to our bizarre timing, I was introduced to sushi and Tepenyaki at this Japanese restaurant, whose flamboyant, talkative chef entertained us well. 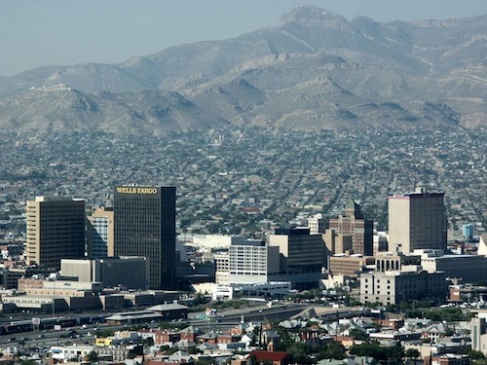 El Paso was a nondescript town back then, home to about 560,000 people, half of them of Hispanic. Its twin city Cuidad Juarez in Mexico is right adjacent to it and I remember standing at the border and peering into the teeming crowds of Mexico. We couldn’t enter because we held Indian passports; US citizens can, I think, for a day. I remember cheap clothes being sold in large boxes, I remember feeling at home, almost like I was walking down a Lajpat Nagar street! I always remember El Paso as a typical American city in terms of urban form, where you drove for miles to buy a toothbrush or grab breakfast!

Though best known, like other towns in the region, for its oil and mining industry, El Paso’s growth has been fuelled by its strategic location that has made it a trade hub between the US and Mexico. Today, El Paso and Juarez form an international metropolitan area of about 2 million people, 2/3rd of which live in the Mexican part. Located in spectacular mountainous landscape, the town also has a university, a large science center and significant military establishment Fort Bliss as well as an Air Force set up nearby.

Coming back to smart growth, it is impressive that a city with a mining history, a city with a large immigrant population, a city that has all the complexity of a border town could come up with a great smart growth plan. Plan El Paso stands out because it inducted the common man as “citizen planners”, consulting widely and consistently (20 citywide and over 150  stakeholder meets) to understand what vision its residents had for the city. The emphasis on walkability and mixed use neighborhoods is impressive. People said they “wanted their lives back” and bus rapid transit combined with investments in downtown and suburban retrofits is what they have chosen for their city. Preserving historic areas also came up as a priority for citizens. Sustainability is a key concern too and the city is following LEED-N (LEED for Neighborhoods) standards to enhance street connectivity. Interestingly, Plan El Paso is anchored by the cleaning and redevelopment of a 600-acre brownfield site that formerly housed the a large smelting company. And best of all, the plan is already under implementation (it was officially cleared only this week!), starting with smaller, achievable tasks and setting the momentum to achieve larger changes.

El Paso’s determination and planning process are inspiring. I drive through Indian cities and see so much under-utilized space–shut factories, storage areas in the middle of town, defunct airports and government offices, even housing that has outlived its functional life. Why can’t we make better choices for our future? It’s not like we are not investing money in our cities. We are, but it seems piecemeal. Cities in India that are still in the population bracket of 100,000 to 300,000 are best positioned, in my opinion, to create citizen-centric plans to create a livable and sustainable future. In all this, the city planner needs a face, a voice; she needs a mandate, support and recognition; she needs to be personally invested in her city, for the extra motivation; I don’t believe it is impossible, but how do we make it happen (apologies, i sound like a stuck record)?

← Practices evolve, but the spirit of holi endures: Innocent love, playfulness and looking beyond appearances- March 8, 2012
From theory to action: Time to shake off the inertia? March 10, 2012 →