← Look, Camera, Pose!! The travails of a novice photographer at the Great Indian Wedding!- Feb 12, 2012
Do we need Valentine’s Day and all those other Days to remind us to be loving, affectionate, human? Feb 14, 2012 →

We landed at the T3 terminal of the Indira Gandhi International Airport in New Delhi yesterday. The luggage was already on the conveyor belt when we got there (that’s the real reason to build an airport so large that the walk time is more than enough for the handlers to get the baggage out!). Soon enough, people had picked up their stuff and gone. Nupur’s bag hadn’t come yet and a suspiciously similar bag was still on the belt. We got the Jet staff to figure things out and sure enough, a certain Ms Pooja Bajpai had walked off with Ms N Chaturvedi’s suitcase, completely ignoring the bright green ribbon Nupur had tied over the handle just to avoid incidents like this!

As the two of us waited for Ms Bajpai to return to the airport, we spoke about how hugely things have changed in the customer service attitudes since just a few years ago. The Jet Airways ground staff person was fairly prompt, unruffled by the situation and very polite yet firm with Ms Bajpai. He explained the situation patiently to her and insisted she turn around to return the bag immediately. Through all this, her bag stayed sort of unattended somewhere near but not inside the Jet Airways counter! We wondered who was taking responsibility for the bag! The guy’s composure stayed intact through the process of locating her as they scurried back and forth the three lanes of traffic outside the terminal, till finally the bags were exchanged and Nupur returned triumphant.

Meanwhile, I was admiring the T3 airport, its sense of busy orderliness as compared to the chaos we normally associate with airports in India. The post-paid radio cab counters operated efficiently (we were lucky to be there on a Sunday evening) and we were home bound soon!

The organized hustle bustle outside T3 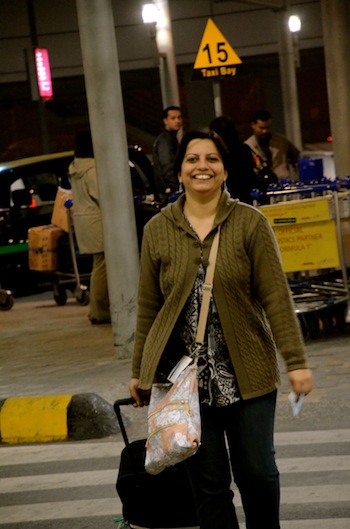 The entire experience was quite a contrast from the crowded Lucknow airport, where instead of making loudspeaker announcements, airline ground staff shouted at passengers to wait, board or hurry! Nobody really knew what is happening. Long lines for the security check and insufficient seating at the departure lounge ensured frayed nerves and rising tempers. But most people did not look annoyed, simply resigned and impatient to get on board and away!

Clearly, traffic at airports in India’s Tier-2 cities is far more than these airports can handle. The current terminal at Lucknow airport was built in 1986. The new 3-storey building was to be inaugurated in November 2011 way before the election, but what we used yesterday appears to be the same terminal I have used for several years now! Media reports that the new 20,000 sq ft terminal will be able to handle 750 passengers at one go. I’m hoping this will be enough. I’m also hoping they’ve found a way to manage the UP Govt white ambassadors outside the terminal to whom no rules apply!

← Look, Camera, Pose!! The travails of a novice photographer at the Great Indian Wedding!- Feb 12, 2012
Do we need Valentine’s Day and all those other Days to remind us to be loving, affectionate, human? Feb 14, 2012 →