← Rockstar: Inspiring introspection about how we need the ‘artistic’ journey
Why cant we ‘just chill’? Hoping to reign in the restlessness in 2012 →

Why build out of context?: Infosys Campus, Mysore- an opportunity missed

Architects and urban designers in India (and many others interested in cities and design) have lamented the paucity of innovative urban architecture in India. So little of what we build in India makes a statement and reflects excellence. And what does, sadly, recreates a Western aesthetic with no reference to our own culture, identity and certainly no relation to the local context in which it is built. This is worrying not only from the point of view of continuity and identity, but from the sustainability perspective as well.

So when I reached the Infosys Campus outside Mysore that I has been excited about, I was in for a shock.  I was there to participate in the India Urban Conference, a mega event to bring together practitioners and researchers to ponder on India’s ongoing urbanisation and related issues. I had seen pictures of the glass dome and had heard from many about the fantastic facilities on the campus created by N R Narayana Murthy as a training centre par excellence. I was curious to see what the rest of the campus was like, and I was really excited to go to Mysore, one of India’s prettiest and most culturally rich cities, of which I had some vivid memories from a childhood trip.

We landed up after a five hour drive from Bangalore Airport to confront one of the most manicured, pretentious and copycat set of architectural construction I have ever seen. An hour-long security heck to enter this haven and the presence of guards ‘watching’ you at ever corner did not increase our pleasure or experience in any way.

To add to it, I was a part of the organising team of the ‘City in Public Culture’ sub-theme in the event. Our group was, therefore, in the most amusing position of emphasizing the value of culture, context, identity and heritage in mainstream city planning and governance in this most uninspiring setting possible.

Don’t get me wrong, the campus reflected supreme excellence in terms of its organization, maintenance of facilities, hospitality, cleanliness, landscaping and what have you. The rooms were functionally designed and there wasn’t anything tangible to complain about. The Infosys trainees seems happy. They had a pedestrianised campus with great recreational options, good food and accomodation and plenty of greenery.

Parthenon plus Byzantine Dome- everyone who walked by had a shocked disbelieving look!

The problem is it could have been ANYWHERE in the world! As one of the speakers in our conference said, the bar of Mysore Sandal soap found in our rooms was the ONLY reminder of where we were.

I cant help feel that this was truly an opportunity missed for a company like Infosys and a man like Mr Murthy, whom we know to be benevolent, well-travelled, patriotic and sincerely interested in contributing to the work of nation-building. A campus like this could have proved that India could deliver excellent services while being rooted in its own culture and context. It didn’t even try!

Interpreted classical meets mundane modern- what is this trying to say? 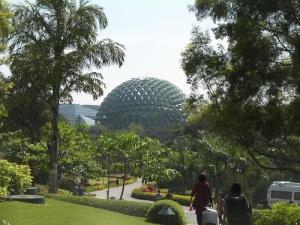 Often photographed- the famed Infosys Dome. Some rude people called it the stegosaurus..not me! 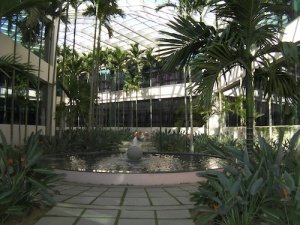 There were some pleasing spaces for sure

Let me not even get into what the place looked like. There are pictures here to tell the tale. I’m aware my opinions are very much that of an architect, but I’m hoping my views might get others to also dwell on the importance of building, working, living, thinking in context! Of course, this was hammered in when we took a quick drive through Mysore city on our way out. What a fantastic visual treat of greenery, heritage structures and the modern all more or less harmoniously co-existing…and what a contrast from the campus we had come from!

Take a look below 🙂 And these are regular institutional and residential structures we didn’t even go to the famed Mysore Palace and Tipu Sultan’s fort, etc…..

For those interested in heritage, here’s a video of Mysore’s art deco market…

IN CONTRAST- Colonial, Indo Saracenic and Medeival built form was evident through Mysore. This is the Corporation building 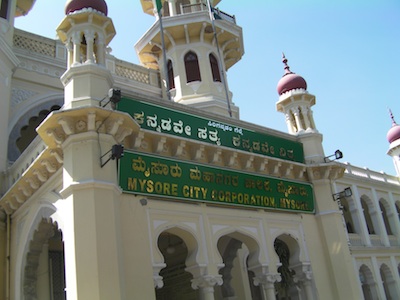 The Indian Heritage Cities Network (IHCN) has taken up for restoration this wonderful bungalow originally built as a Professor’s home in the Mysore University campus in the early 1800s. This will also be their office!

← Rockstar: Inspiring introspection about how we need the ‘artistic’ journey
Why cant we ‘just chill’? Hoping to reign in the restlessness in 2012 →