← No choice, yet many aspirations
A sense of belonging (Goa in my heart) →

Continuing on my ramble (pun intended ) about owning, reshaping and energising public space…I was touched and impressed by the recent fun my friend Kriti and her gang had at one of my favourite haunts in Delhi- the Hauz Khas monument. Fans and lovers of typography, this group (Delhi Typervention) meets up now and then to have fun with fonts, expressing thoughts in a variety of media using typography. They choose to create these installations in public spaces, with the idea of involving passers by, provoking them to think about their city- its history, environment, culture, people…. 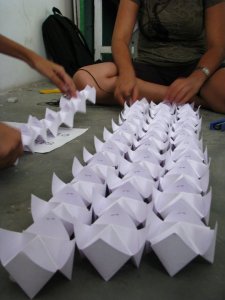 For me, they hit the right chord by using origami fortune tellers, the kind we made in school and wrote colours, numbers, names inside and played with, wearing them on our fingertips and testing the fortunes of our friends- sheer nostalgia this! Now these wonderful little paper constructions were made in the hundreds and arranged to spell Hauz e Khas in a specially designed typeface, of course! Three feet by fifteen, the group proceeded to float the word in the Hauz Khas lake, a water body of medieval origin, for the sheer delight and enjoyment of 21st century city dwellers out for their walk, jog or romantic stroll.

Many would question the poi

nt of putting in so much effort to create something so transitory. One critic questioned the lack of a relevant message. Yet, the effort touched my heart. What’s the difference between a few minutes and a few centuries for a city like Delhi that spans aeons, is home to millions and dwells in our hearts? For something to touch you, it need not endure. I wasn’t there the time they floated the wonderful fortune tellers into the water. I didn’t experience their joy at forming the letters or their disappointment when the letters floated away, distorting the carefully created type. Yet, their work lives on through posts like mine and I laud their spirit. For they have, unlike you and me, claimed Delhi’s spaces for their own…

Content: Many thanks to Pooja’s blog and Kriti’s FB entries

← No choice, yet many aspirations
A sense of belonging (Goa in my heart) →